Posted on December 3, 2018 by revmichaelkane

Sunset at the Mezcal Distillery

Exploration is really the essence of the human spirit. ~ Frank Borman

The Institute I’m studying Spanish at has two tours they support, a Saturday tour that I did last weekend.  That tour goes to Monte Alban and several other places and I’ll get a post up about Monte Alban at some point soon, it was a really amazing place.

The Sunday tour goes to several places as well, we started our day by stopping at Santa Maria de Tule, the home of a really giant tree.  This tree is a Montezuma Cypress, at least 1600 but likely over 2000 years-old, almost 60 feet in circumference and 31 feet in diameter.  It is truly an amazing tree. 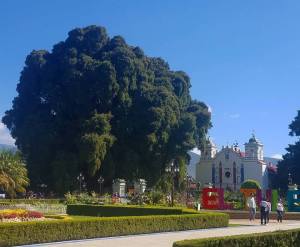 Next we went to a family run business, this is a Zapotec traditional weaving family who use wool, clean and dye it using things like flowers, seeds and insects.  The tapestries they make are absolutely beautiful. 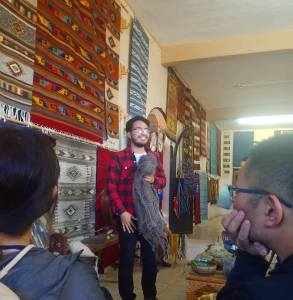 We then visited Hierve El Agua, the boiling waters.  The site is someplace that has natural boiling water that comes up through the rocks.  The water is mineral laden that deposits along the rock faces as it drips down over the rocks.  This creates the effect of a frozen rock waterfall.  On top there are also some really beautiful pools that fill with water and people swim in. 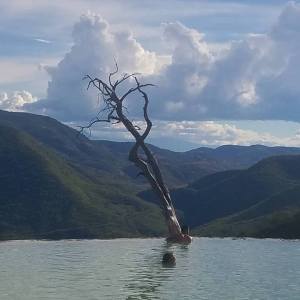 Finally, on the way back to Oaxaca we stopped at a traditional Mezcal distillery that was beautiful and I tasted a five year-old Mezcal that made me considering picking up drinking again.

It was a full-on nine-hour day, with a nice buffet lunch that included chicken with grasshoppers, the food was really good and the buffet was loaded with vegetables and I ate a ton.  I was the only native English speaker on the trip although there were four Chinese tourists who also spoke some English and after our guides left the tour, the driver asked me to interpret between him and the Chinese tourists which made me feel pretty good about my Spanish skills.  So a really great day.  I hope you had one as well my friends. ~ Rev Kane

Reverend Michael Kane is a writer, photographer, educator, speaker, adventurer and a general sampler of life. His most recent book about hiking and happiness is Appalachian Trail Happiness available in soft cover and Kindle on Amazon
View all posts by revmichaelkane →
This entry was posted in 2018 Adventure and tagged adventure, happiness, hierve el agua, mexico, oaxaca, travel, tule tree, weaving, zapotec. Bookmark the permalink.