Happiness is Travel: Winnipeg (The Murder Capital of Canada)

Posted on December 2, 2015 by revmichaelkane

I’m a Canadian. Outside Canada I carry the flag. Canadian nationalism isn’t as insidious as American nationalism, though. It’s good natured. It’s all about maple syrup, not war. ~ Feist (Canadian pop singer)

Recently I did a polar bear tour in Canada and our jumping off point was Winnipeg and I decided to spend a couple of extra days in Winnipeg to check out the city.  Prior to arriving of course I did some research on the city and was shocked to find out that Winnipeg is THE MURDER CAPITAL OF CANADA!  It is important of course to put this on an America scale for comparison as you need to understand how dangerous the city really is for a visitor.

First a look at homicide rates in Canadian cities:

The graph fails to show that the numbers are per 100,000 people.  So for every 100,000 people in Winnipeg 3.6 are murdered on an average basis. How does this compare to homicide rates in American cities?

Looking at the graph we can see that the murder capital of Canada is just slightly less dangerous as that bastion of murderous hippies and hipsters, Portland, Oregon.  Given I’ve never had anyone say to me, hey man, don’t go to Portland you’ll die there, I figured Winnipeg would be ok.  I’ll save any comment on the comparison between the two countries, I think the graphs speak for themselves.

So a little more research resulted in me learning some really interesting things about Winnipeg.  Winnipeg in addition to being the murder capital of Canada it is also the Slurpee capital of the world!  In a city of about 750,000 people, 400,000 Slurpees are consumed every year.  Walking into a mini-mart you are likely to find a dizzying array of Slurpee flavors available.  Winnie the Pooh was also supposedly named after the city and Winnipeg created the worlds first 911 system, which of course being a murder capital that makes sense.

The downtown area art district had some neat architecture.

All kidding aside I really liked Winnipeg, it reminded me of places like Sacramento, CA or Albany, NY.  Capital cities that are not huge but big cities with really diverse pockets around the city.  One really cool thing about the city is that there are murals everywhere, it’s like the city is addicted to them.  The site Murals of Winnipeg has pictures of all of them and some were quite nice.

One of the features of the city is the Canadian Museum of Human Rights.  I was in town over Canadian Thanksgiving so was unable to tour the museum but the architecture is unique and from everything I’ve read it’s a really amazing museum. 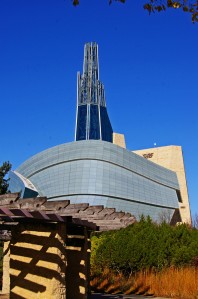 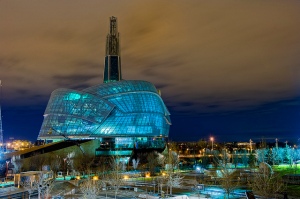 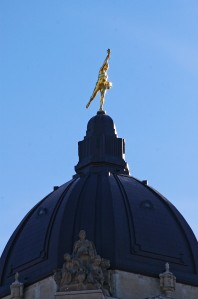 My favorite part of the city was Assiniboine River Park , (do not try and pronounce that word without listening to a local first), called The Forks.  My best pronunciation guide is A-Sin-A-Boy.  But there are so many bad ways to mess up that word.  The park is beautiful and runs along the Assiniboine River to the confluence with the Red River.  There are parks along both rivers with views of the bridge, the Human Rights Museum and St. Boniface across the Red River. 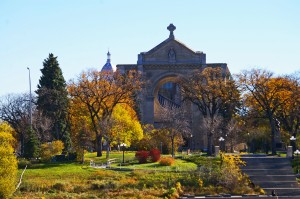 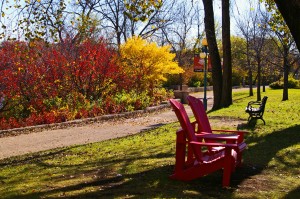 The Forks area had some shopping areas and restaurants and most impressively a huge community garden area.  Not the kind of garden you go and tend and work, but a city maintained area where you can just pick a piece of fruit as you walk by, pretty amazing.

The thing that always strikes me in Canada, excluding Quebec, is how amazingly similar it is to the US, except for these little differences that pop up.  For instance, in Canada I’m reminded in the US we are behind the times financially as our US credit cards are swipe and sign, not swipe and pin.  All of the same chain restaurants there and some Canadian originals but they all are just a bit off, like the mama and papa burgers at the A&W Root Beer restaurant.  Finally, Canadian TV is obviously broadcast at a higher dpi than in the US, the picture is amazingly sharp and detailed and some actors and actresses must really hate it because some of the close-ups, whoa!

Finally, no discussion of Canada would be final without a final word, or at least in this case a final picture of my favorite Canadian dish.  Have a happy day my friends ~ Rev Kane 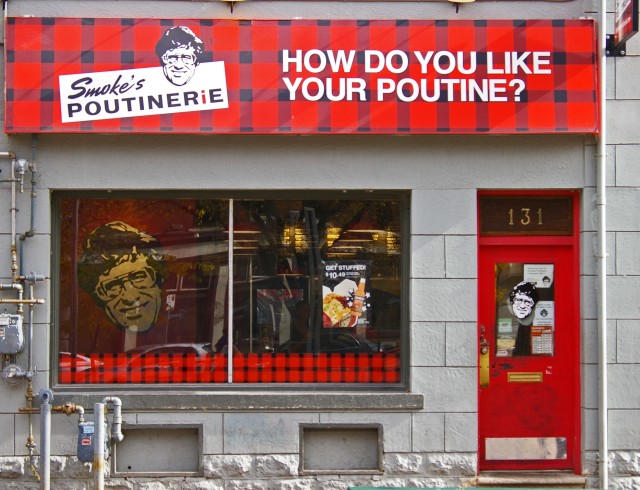 Reverend Michael Kane is a writer, photographer, educator, speaker, adventurer and a general sampler of life. His most recent book about hiking and happiness is Appalachian Trail Happiness available in soft cover and Kindle on Amazon
View all posts by revmichaelkane →
This entry was posted in Happiness is Adventure, Happiness on the Road and tagged assiniboine, canada, happiness, homicide, human rights, murder, photography, poutine, travel, winnipeg. Bookmark the permalink.

2 Responses to Happiness is Travel: Winnipeg (The Murder Capital of Canada)