Photo credit to our guide Drew

When I look at the northern lights … I see our ancestors dancing around a sacred fire, lighting the way for us when it’s time for us to cross over from this physical world and join them. ~ Molly Larkin

As many of you know, a little over a year ago I sold my house, quit my job and hit the road.  I spent the Summer hiking 1000 miles on the Appalachian Trail, my thru-hike ambitions were cut short by a knee injury.  But after rehabbing my knee I went north to check off an item on my bucket list that has been near the top for the last couple of years and this is the second part of my writing about the trip.

As we were getting ready for bed on the first night at the Tundra Lodge, our guides explained a weird little sign that was on all of our doors.  Unlike the signs we’re used to at hotels, these signs said, please disturb.  The signs let the staff and guides know that if an Aurora Borealis (Northern Lights) show erupted that they should wake you up so you could check it out.

Everyone on the trip was hopeful that we would get to see the Northern Lights given that Churchill may in fact be the best place on earth to see them.  The absolute best time of year is the late winter/early spring but they can be visible any time of year in Churchill.  The first night however it was warm and cloudy and we had absolutely no luck and knowing that we all got a full night of sleep.

So there was no evening photography but the mornings are pretty on the tundra as well:

We would spend our second day out on the tundra searching for wildlife and quite frankly the morning was frustrating. As often happens when searching for wildlife you can go hours and see absolutely nothing and then see a bunch of animals in quick succession.  Wildlife photography in particular is an endeavor for the patient,  I do not count myself in the category of highly patient humans but it did allow me to focus on more landscape shots, this one is my favorite.

The temperatures had dropped over night and it made for some pretty Rime Ice in certain areas. Rime Ice forms when water gets sprayed in the wind and freezes, in this case on plants.

We spent most of the morning without luck on the wildlife front, we had a quick view of some Ptarmigan but I didn’t get any photos of my own.  For illustrative purposes here’s a picture off of the web of what they look like.

We got some distant views of bears and couple of quick good shots but all in all it felt like a bust of a day as we rolled back towards the Tundra Lodge.  We all hoped that the bear who had come to visit the lodge the night before might return.

By the time we got back to the lodge the temperatures had really dropped and the skies had started to clear, so we were all starting to get hopeful about a lightshow.  I was the pessimist in the group but was assured by the Australians on the trip it would happen as they’d brought the Aussie luck with them, they should bottle the stuff.

With clearing skies we got a really great sunset, it started with the early rays setting the tundra on fire with beautiful red light. 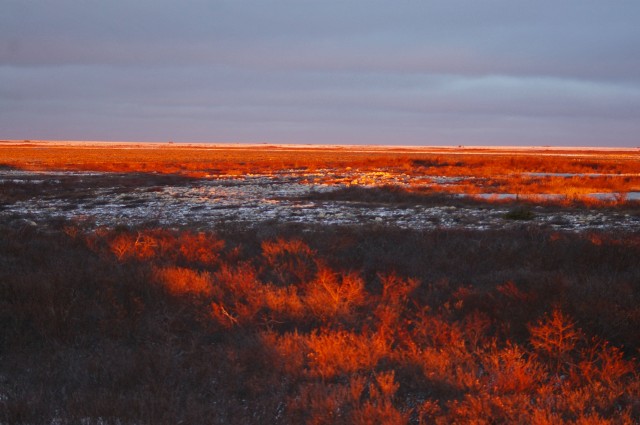 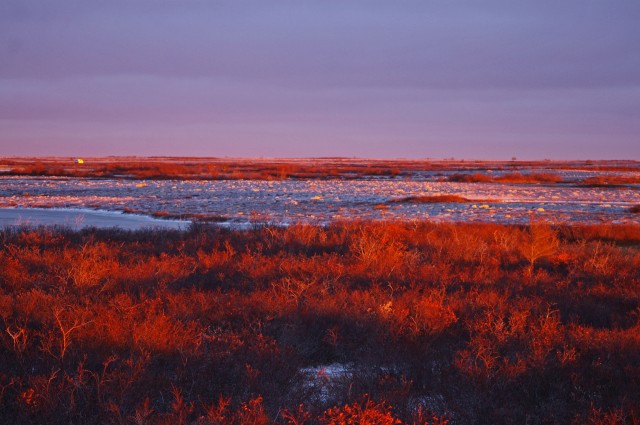 Then as the sun hit the horizon things really started to fire up. 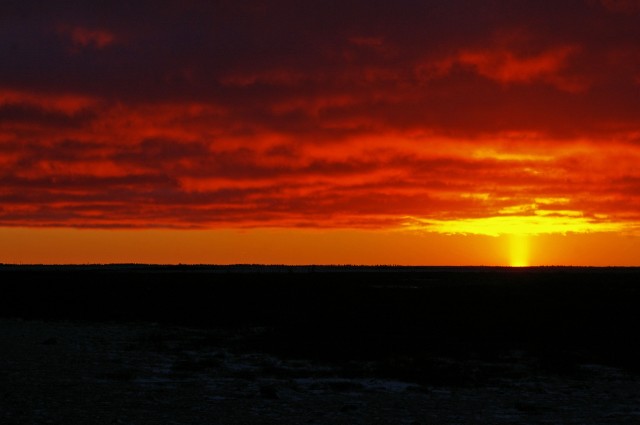 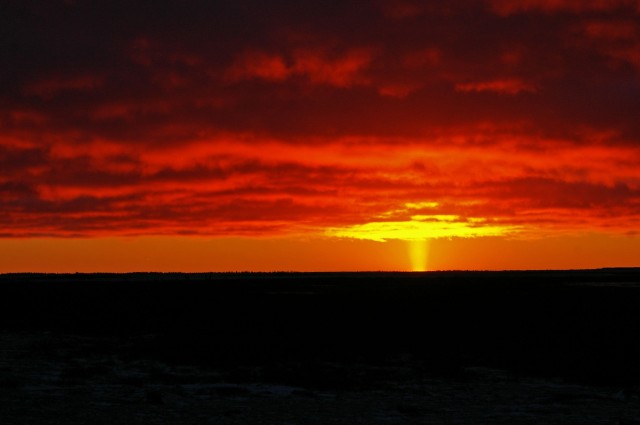 Then a trick I hate to admit I learned from reading The Bridges of Madison County, many times the best sunset shots come after you think it’s all over after the sun’s gone down. 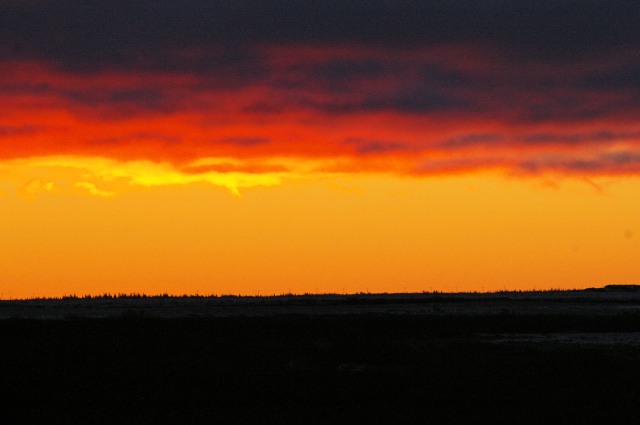 Even Mr. Polar Bear decided he wanted to check out the sunset.

Happily on this evening, Mr. Polar Bear (a roughly 1100 pound male) had decided he wanted a closer look at things including the rover that had stopped in front of the lodge to watch the sunset. 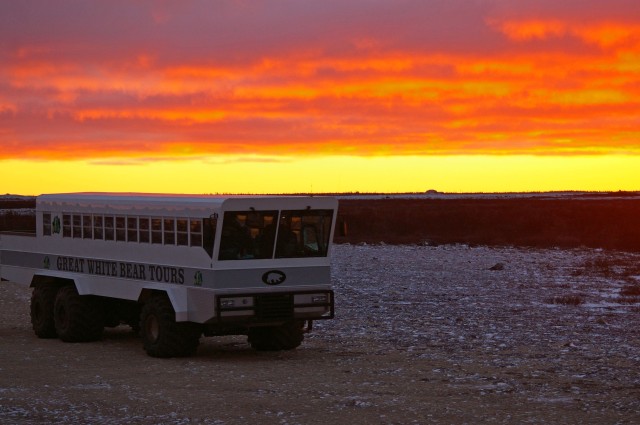 Apparently, the rover had caught his interest. 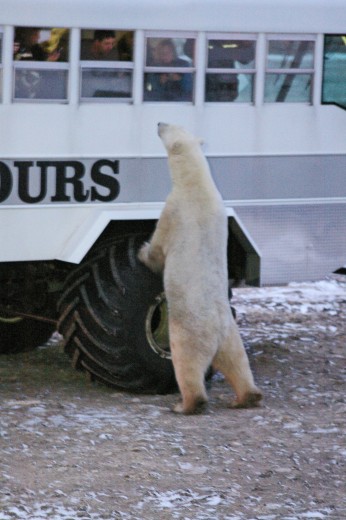 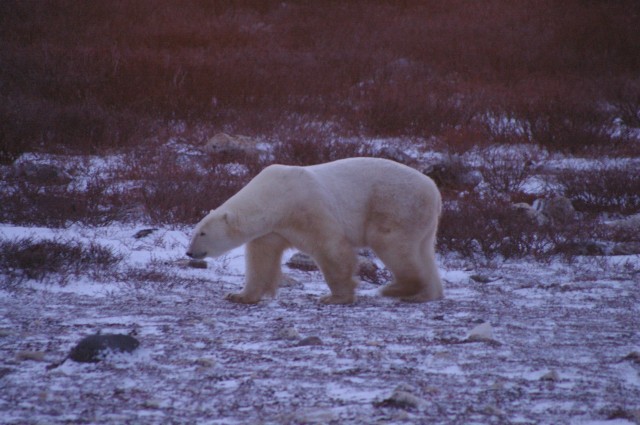 After realizing he wouldn’t be able to eat the people in the rover he noticed all of us out on the decks of the lodge and he decided to come visit. This shot is a bit hard to see but what it is showing are the grates at the bottom of the decks about 6 feet off of the ground.  The bear is walking underneath us and is only a foot or so away.  One person put their hand flat on the grate and the bear lifted up its head, decided to sniff the shoe next to the hand and dropped back to the ground.  When that happened I was crouched down and my face was 2 feet from the face of a polar bear, it was AMAZING to be that close to such an incredible creature.

He took a good close look at us.

And I share this next shot because I love that I caught him with his eyes closed. 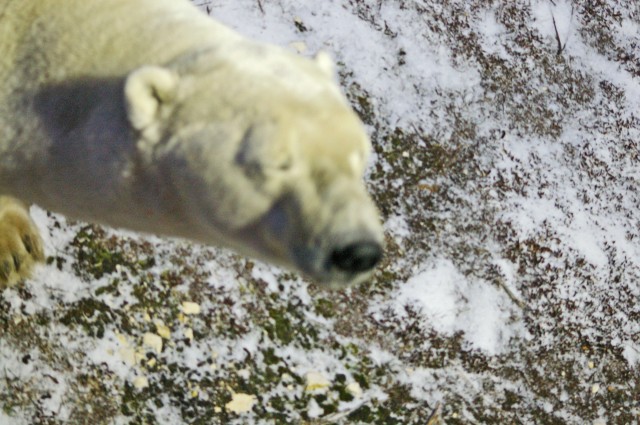 I had joked before I went on the trip that for the money I was spending I should be able to get a polar bear selfie.  Given what they advertised could happen at the Tundra Lodge, this didn’t seem completely impossible, and it wasn’t.

Dinner that night was a buzz of activity, everyone excited from our close up bear observation.  In fact the bear was now laying down just outside the lodge while we were eating dinner.  Between the sunset and the bear sightings it had been a truly memorable day, one I would classify as one of the best of my life.

After dinner each night there was a presentation and that night one of our guides, Drew was presenting on Grizzly bears.

Drew and the Rev

Drew was presenting on Grizzly bears in Alaska, he works with the Alaska Fish & Wildlife Service and he had lots of close up observation videos of Grizzlies to show us.  He also runs a trip where you can get just as up close and personal with Grizzlies in Alaska.  This trip seems absolutely insane to me, but if you’re going to do something like this, he’s the guy to go with and his stories about the trips and his work were absolutely amazing.  As Drew wrapped up his talk we started asking about auroras and our please disturb signs when the staff said, “don’t bother”, I was bummed until I heard the rest of the sentence, “it’s already started.”

This of course initiated a mad dash for cameras and tripods.  It was my first time shooting aurora and honestly I didn’t do a great job but I got a few good shots and have borrowed a couple from Drew including the one at the top of the piece. 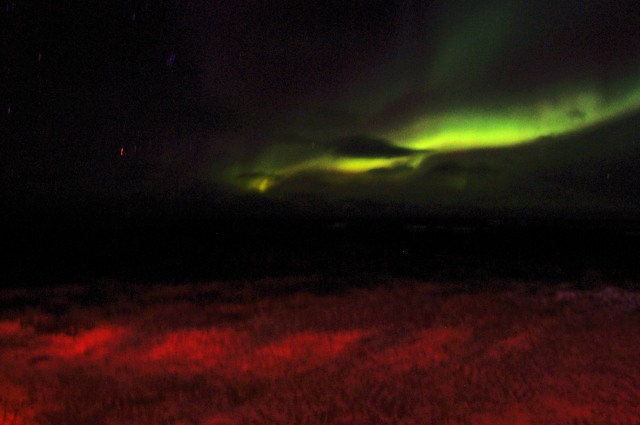 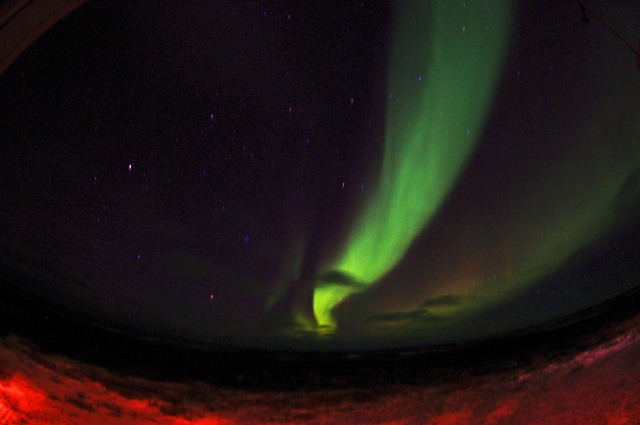 The show started off with just faded green light, then things started to get interesting, you can see in the last shot above traces of red at the edges of the green.  It’s hard to get these shots you need long exposures and a stable camera.  I had brought a crappy little travel tripod that was useless, so I ended up taking these shots braced against the building with my fish eye lens.  The traces of green quickly turned into massive waves of green light. 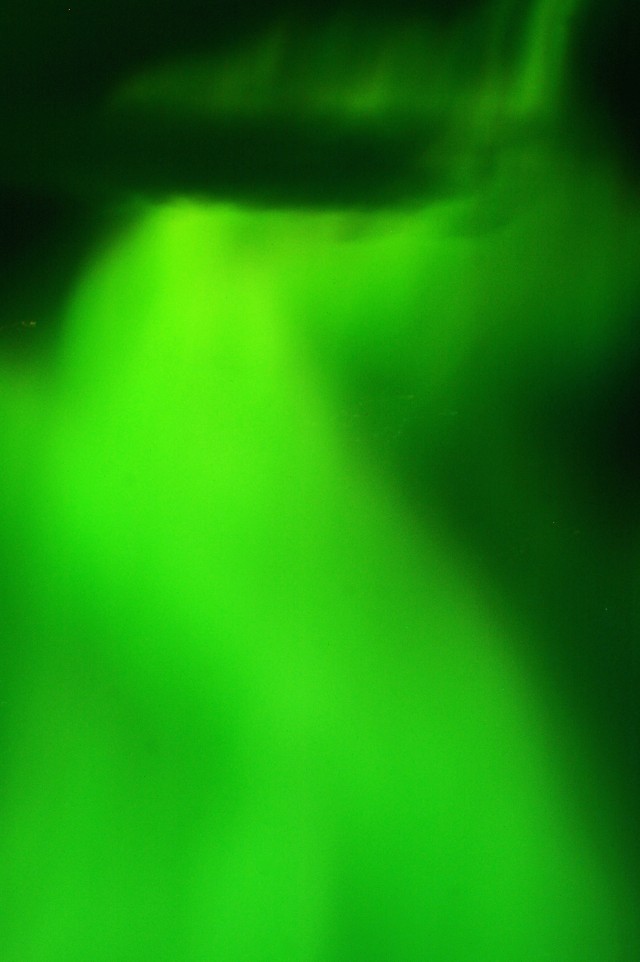 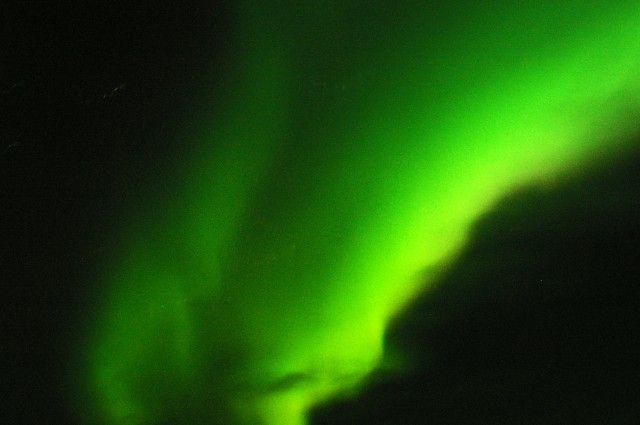 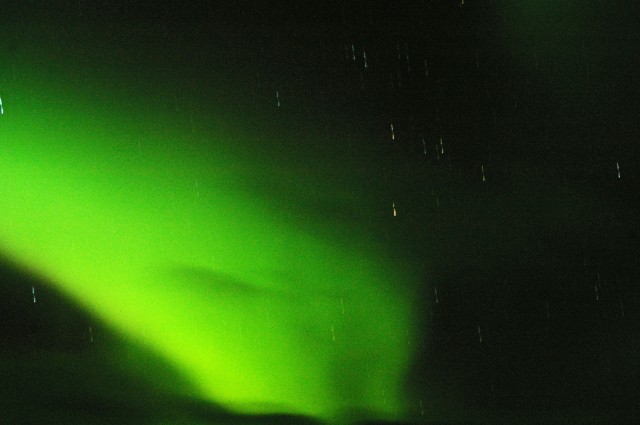 From the massive waves the most amazing thing started to happen, the light organized into two rivers of light screaming past us, then they started to swirl. 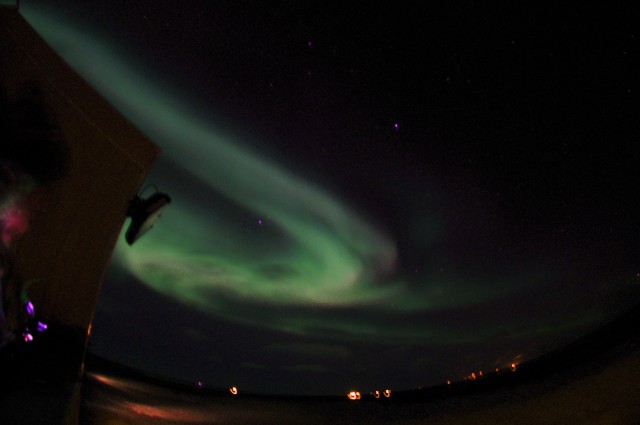 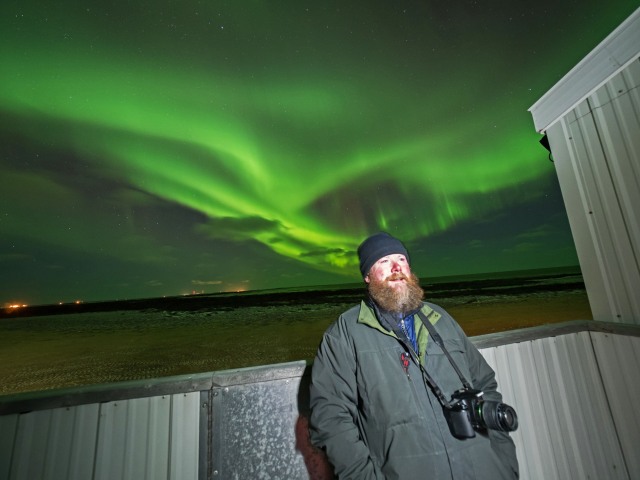 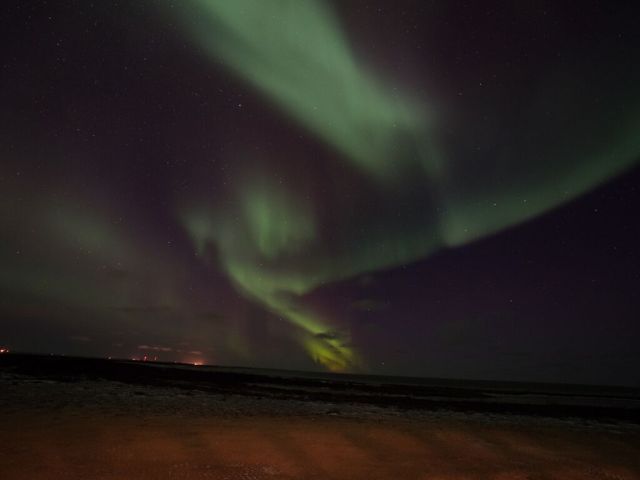 At one point, my hands frozen and in pain I finally stopped shooting, put my gloves on, buried my hands in my parka and just watched.  The show was beyond description, I was sooo happy, I can’t even relate to you the level of joy that was coursing through my body.  Someone said, “oh my good look straight up.” I did and saw the most magnificently beautiful thing I might ever see.  The two rivers of light arcing across the sky, one green, one red had intersected each other and were spinning into a spiral of alternate red and green bands like one of those giant lollipops.  People were literally giggling with joy like little children, I was one of them.  The whole display lasted about two hours and as it was fading I went to watch the dying lightshow through the window of my room.

In the last twelve hours I’d seen a magnificent sunset, been two feet face to face with a polar bear, got my polar bear selfie and saw my first Norther Light show and it had exceeded my wildest imaginations in its scale and beauty.  Simply the best day of my life so far.

When we got into town the next day everyone was buzzing about the lightshow.  Locals who had lived in Churchill their whole life said they couldn’t ever remember seeing a better aurora and we caught it in the middle of the tundra on the shores of Hudson Bay with no light pollution, a once in a lifetime score and a very, very happy day my friends ~ Rev Kane

Michael Kane is a writer, photographer, educator, speaker, adventurer and a general sampler of life. His books on hiking and poetry are available in soft cover and Kindle on Amazon.
View all posts by Michael Kane →
This entry was posted in Happiness is Adventure and tagged adventure, arctic, aurora, churchill, happiness, Northern lights, photography, Polar bear, sunset. Bookmark the permalink.