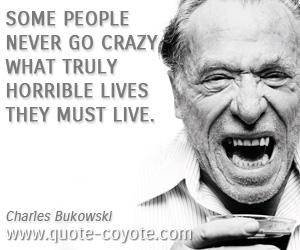 Hello friends, I’ve posted a few posts of Charles Bukowski’s poems but tonight I want to go a little further with my favorite poet. I actually found Bukowski first through his novels, the writing was raw, honest and touched me. Within the books there was some of his poetry and that was my entry way into Bukowski the poet. Over a one year period I read everything I could get my hands on and since then, as a book collector, have bought a number of his rarer books. Bukowski is beyond rough around the edges, he’s just plain rough, some would say a hard man. Bukowski is not for the faint of heart. In tonight’s post, some stories, interviews and of course some of his poetry, enjoy my friend, have a read and a happy day ~ Rev Kane

A Smile to Remember

we had goldfish and they circled around and around
in the bowl on the table near the heavy drapes
covering the picture window and
my mother, always smiling, wanting us all
to be happy, told me, “be happy Henry!”
and she was right: it’s better to be happy if you
can
but my father continued to beat her and me several times a week
while
raging inside his 6-foot-two frame because he couldn’t
understand what was attacking him from within.
my mother, poor fish,
wanting to be happy, beaten two or three times a
week, telling me to be happy: “Henry, smile!
why don’t you ever smile?”
and then she would smile, to show me how, and it was the
saddest smile I ever saw
one day the goldfish died, all five of them,
they floated on the water, on their sides, their
eyes still open,
and when my father got home he threw them to the cat
there on the kitchen floor and we watched as my mother
smiled
************************************************

Relentless as the Tarantula

they’re not going to let you
sit at a front table
at some cafe in Europe
in the mid-afternoon sun.
if you do, somebody’s going to
drive by and
spray your guts with a
submachine gun.
they’re not going to let you
feel good
for very long
anywhere.
the forces aren’t going to
let you sit around
fucking-off and
relaxing.
you’ve got to go
their way.
the unhappy, the bitter and
the vengeful
need their
fix – which is
you or somebody
anybody
in agony, or
better yet
dead, dropped into some
hole.
as long as there are
humans about
there is never going to be
any peace
for any individual
upon this earth or
anywhere else
they might
escape to.
all you can do
is maybe grab
ten lucky minutes
here
or maybe an hour
there.
something
is working toward you
right now, and
I mean you
and nobody but
you.
**************************************

A Close Call While Shopping

pushing my cart through the supermarket
today
the thought passed through my mind
that I could start
knocking cans from the shelves and
also rolls of towels, toilet paper,
silver foil,
I could throw oranges, bananas, tomatoes
through the air, I could take cans of
beer from the refrigerated section and
start gulping them, I could pull up
women’s skirts, grab their asses,
I could ram my shopping cart through
the plate-glass window…
then another thought occurred to me:
people generally consider something
before they do it.
I pushed my cart along…
a woman in a checkered skirt was
bending over the pet food section.
I seriously considered grabbing her
ass
but I didn’t, I rolled on
by.
I had the items I needed and I rolled
my cart up to the checkout stand.
a lady in a red smock with a nameplate
on
awaited me.
the nameplate indicated her as
“Robin.”
Robin looked at me: “how you doing?”
she asked.
“fine,” I told her.
and then she began tabulating my
purchases
not in the least knowing that
the fellow standing there before her
had just two minutes ago been
one grab from the
madhouse.

Michael Kane is a writer, photographer, educator, speaker, adventurer and a general sampler of life. His books on hiking and poetry are available in soft cover and Kindle on Amazon.
View all posts by Michael Kane →
This entry was posted in Happiness is Poetry and tagged blog, bukowski, happiness, happy, poem, poetry, writing. Bookmark the permalink.

10 Responses to Happiness is Poetry: Even More Bukowski