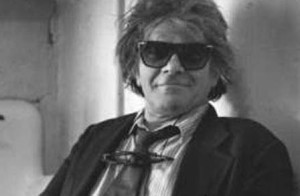 Another poet I found via the American Bible of Outlaw Poetry.  I love the picture above it really seems to fit his words.  The second poem, The American Way, was written in 1970, if someone had told me 2017, I wouldn’t have blinked, funny that. ~ Rev Kane

By Gregory Corso
I ran up six flights of stairs
to my small furnished room
opened the window
and began throwing out
those things most important in life
First to go, Truth, squealing like a fink:
“Don’t! I’ll tell awful things about you!”
“Oh yeah? Well, I’ve nothing to hide … OUT!”
Then went God, glowering & whimpering in amazement:
“It’s not my fault! I’m not the cause of it all!” “OUT!”
Then Love, cooing bribes: “You’ll never know impotency!
All the girls on Vogue covers, all yours!”
I pushed her fat ass out and screamed:
“You always end up a bummer!”
I picked up Faith Hope Charity
all three clinging together:
“Without us you’ll surely die!”
“With you I’m going nuts! Goodbye!”
Then Beauty … ah, Beauty—
As I led her to the window
I told her: “You I loved best in life
… but you’re a killer; Beauty kills!”
Not really meaning to drop her
I immediately ran downstairs
getting there just in time to catch her
“You saved me!” she cried
I put her down and told her: “Move on.”
Went back up those six flights
went to the money
there was no money to throw out.
The only thing left in the room was Death
hiding beneath the kitchen sink:
“I’m not real!” It cried
“I’m just a rumor spread by life … ”
Laughing I threw it out, kitchen sink and all
and suddenly realized Humor
was all that was left—
All I could do with Humor was to say:
“Out the window with the window!”

Michael Kane is a writer, photographer, educator, speaker, adventurer and a general sampler of life. His books on hiking and poetry are available in soft cover and Kindle on Amazon.
View all posts by Michael Kane →
This entry was posted in Happiness is Poetry and tagged gregory corso, outlaw poetry, poem, poems, poetry, poety, writing. Bookmark the permalink.