My COVID Times Diary – the highs and lows

My COVID Times Diary – the highs and lows

Tell your heart that the fear of suffering is worse than the suffering itself. And that no heart has ever suffered when it goes in search of its dreams, because every second of the search is a second’s encounter with God and with eternity. ~ Paulo Coehlo

Well I think we’re at week 10 of our shelter in place, work from home reality.  Things are certainly starting to change.  Here in California yesterday, there were 53 deaths, 46 of those deaths occurred in Southern California in LA or Orange County. The infection is certainly on the downslope here in Northern California.  People are tired of the limitations, of working from home, of being in their homes a lot.  They in general don’t like the idea of wearing a mask and taking precautions.  Where required, people are being compliant enough.

But we find ourselves at an interesting crossroads here in the United States of America.  The fact is our economy has not show itself to be particularly resilient and our government has been unable or unwilling to provide support at a level that would allow the shelter in place to continue without significantly hurting the economy.  The pain of the economic crash is growing and so we move forward with “opening” our economy.  What this really means is that we will remove the restrictions that we have in place for safety, in order to increase spending to support the economy.

This of course has significant risks.  As we have seen in China and other places that the reduction in this health and safety protections inevitably leads to additional infections.  it just makes sense, if more people interact with each other, a disease that spreads best by face to face contact is going to be more successful if there’s more face to face contact.  Now this does not have to be a catastrophe.  If people follow the proper protocols, including maintaining social distancing, wearing masks, limiting group sizes and avoiding unprotected sustained face to face contact, and washing their hands then sure there will be some minor outbreaks, but those should be able to be handled.  Pair this with increased testing ability, quarantine policies and effective contact tracing and we’ve likely arrived at a safe new normal.  Assuming all of those pieces are in place.

So let’s be optimistic first, let’s take the position of the, this is no big deal crowd.  Let’s say that the infection has burned itself out enough in places like New York and San Francisco and we can effectively ease restrictions without significant outbreaks.  That sounds really amazing, it leads to thoughts of dinners out with friends.  Of rebooking the trip I cancelled in March to Las Vegas and returning to throw some dice at the craps table.  We can dream that places like LA and Houston are just a few weeks behind other cities and similarly they’ll be fine in a few weeks as well.

This sounds so inviting, reopening schools with some sense of normalcy in August.  Full plane flights as people move around the country to vacation.  Hotels re-opening, attractions re-opening, life, as we knew it, almost the way it was with few inconveniences.  Those of you dreaming this are not alone, Las Vegas and Reno are re-opening June 4th, Notre Dame University is opening for face to face classes on campus in August.  In Florida, Walt Disney will open in July, but if you can’t wait, Seaworld in Orlando will be open in June.  Heck I bet we can even reschedule high school graduations and proms for some time in the summer.

It’s a lovely vision that I would love if it held up.  It would mean that I could consider booking my trip to Australia to hike the Overland Track in Tasmania.  But is it realistic?

So, maybe our fantasy above doesn’t pan out.  And I’ll put in a little trigger warning right now.  If you’re someone who is totally freaked out by the whole COVID reality don’t read the rest of this, it will not help your anxiety.

I’m going to start with an image.

This was a place called Lake of the Ozarks on Memorial Day weekend, as soon as the place was open.  The same thing happened in bars in Wisconsin within hours of restrictions being lifted.  In the picture there are no masks, no six foot distancing going on at all.  People in this country feel entitled to do what they want and don’t care about the rules in place.  So much so, that they actually get violent at times when asked to do what’s best for society.  Here are two examples.  A woman in Michigan was told that her and her child needed to wear a mask in order to enter a store.  A little while later her husband and son returned to shoot the security guard who was enforcing the rule.  In Oklahoma, two women angry that their McDonalds wasn’t offering dine-in service like other restaurants shot teenagers working there.  I watch people even here in liberal California, mostly only wearing masks when they know they won’t get what they want without wearing one.  Meaning at work, grocery stores and while getting take out.  But even then, I see some people wearing the mask over their mouth but not their nose.  I see people handling and putting products back on the shelf, and walking right up next to others with no consideration for the potential risk.  Americans are acting like Americans and refuse to let anyone tell them what to do, even if it’s for their own good.

So what does this American attitude and re-opening of our economy mean in light of this?  Well it means more infections and more death.  When we add into all of this the recent protests, first by people opposing shelter in place restrictions and secondly the social justice protests after the killing of George Floyd and you just have more and more opportunities for the virus to spread.  Include the increased contact from people being together in restaurants, gyms and salons and it all screams second wave.  Ok, we all expected a second wave, so what’s the big deal?  Well, lets compare COVID 19 to the last time we had a novel virus creating a global pandemic, the 1918 Spanish flu.  Which in fact, killed far more people in 1919 during its second wave, than it did in it’s first wave.

And keep in mind, as the graph above shows, there was also a third wave of the virus.  All of this took place over a roughly two-year period.  Now, there are differences between the two pandemics.  The 1918 flue was far more deadly, our medical systems were not as good, and we know far more about viruses now than we did then.  Which is one reason why not as many people are dying during this pandemic.  But it’s not the numbers I want you to look at in this graph, it’s the pattern.  Sure, the 1918 virus mutated to become more virulent during its second wave, so the spike from COVID might not be so extreme, but it is almost certainly coming.  Given what I’ve discussed above I would say the chances are very, very good it comes again in the next few months, further exacerbated by the normal factors around flu season and flu season itself.

So what we are looking at on the low side of this discussion is a second wave of COVID, along with a long-term recession/depression.  We are already at nearly 15% unemployment rate as of the end of April, with continuing increased numbers through May.  Airlines and other industry have been discussing additional layoffs as a result of the pandemic, so things are likely to get worse before they get better.  Even with the opening of the economy, it will not spring back like a rubber band without extreme consumer confidence that they are safe, and I know few people right now who feel safe.

So right now in America, we have an pandemic that has killed over 100,000 people in effectively three months, the worst unemployment rate since the great depression and the specter of a second and possibly worse wave of COVID looming in our immediate future.  The big question is, what is America’s breaking point?  With food distributions serving hundreds and thousands of families running out of food in a couple of hours, with unemployment climbing and riots in the street, at what point is any of this too much.  I would say we’re resilient enough to handle what we’re facing right now.  But were there to be one more major stressor, it might be too much.  So let’s hope and pray that fire season isn’t too terrible, that the big one doesn’t hit the New Madris or San Andreas faults, that the Yellowstone Super Volcano doesn’t blow or a meteor doesn’t slam into the planet.  Not very uplifting I realize and the fact is that reality will likely be somewhere between the fantasy high or the most depressing low.  But this is where my head is tonight and as I’ve stated in each of these pieces.  I’m writing this mostly for posterity, a diary of where my thoughts were at during the pandemic.  ~ Michael ‘Rev’ Kane 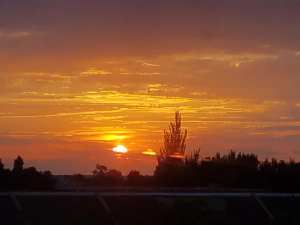 Is this the end?

Michael Kane is a writer, photographer, educator, speaker, adventurer and a general sampler of life. His books on hiking and poetry are available in soft cover and Kindle on Amazon.
View all posts by Michael Kane →
This entry was posted in Life in Covid Times and tagged coronavirus, COVID, covid times, covid-19, protests, recession, unemploymet. Bookmark the permalink.