My COVID Times Diary – Do we get it now?

My COVID Times Diary – Do we get it now?

When the coronavirus first struck the United States earlier this year, there was a large amount of incredulity from the President on down to the people in the street.  I constantly heard how this is nothing more than the flu.  People debated about how few people had died.  I heard a lot about how shelter in place was a giant over reaction.  People felt very confident that the virus would disappear in the summer, you know, when it got it hot.

People have been, and amazingly still are, protesting mask wearing recommendations as an infringement of their personal freedom.  As if their ability to cover their face should be more important than keeping people alive.  People screamed loudly how this fake health crisis shouldn’t hurt the economy.

Well, let’s address reality at this point.  Here’s a couple of images from today’s Washington Post. 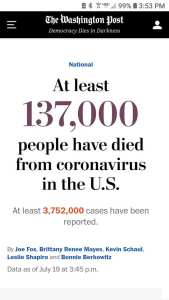 What these images show us are two very important things.  The first, at least 137,000 people have died in America from the coronavirus.  That number is certainly an underestimate, by comparison a really bad flu year would be 60,000 deaths.  The number above is from about five months.

The second thing the images show us are, is that at one point we had as many as 2,000 Americans a day dying from COVID. That number which had been significantly decreasing is now starting to trend upward again, we are quickly re-approaching 1,000 people dying a day.  And the number of cases is escalating at an alarming rate, and given the significant lag time between infection and death, it means that the graph of deaths above is likely to continue to climb again for some time.

All these fantasies we put forward in the early days including fully opening the country by Easter, then by Memorial Day all have faded away, as early openings, protests, Memorial Day and the Fourth of July gatherings and even “COVID” parties have led to skyrocketing infection rates.

One of the hardest lessons for people learn is a very simple one.  There are consequences to your actions.  In some countries the government and the citizenry took this virus seriously and life is returning to some semblance of normal.  Countries that acted quickly and stuck to the basic tenets of fighting pandemics have fared much better than the US.  There is nothing complicated about what you’re supposed to do.  You shelter in place and use that time to ramp up testing, quarantining and contact tracing resources.  Once you’ve accomplished that, you slowly and carefully begin to re-open.  You do this with heightened testing so that you catch hot spots quickly, then you quarantine folks who are sick or exposed.  Where infections stay low you can progress with opening, where they spike you shut back down.  It was well explained in a piece earlier this year called the hammer and the dance. You work this process until there is a viable vaccine developed and distributed.  Oh, and while all this is going on, you wear a damn mask, which has been shown to seriously slow the rate of infection.

But in the United States we didn’t do any of these things, we opened indoor restaurants and bars, we didn’t implement mask mandates and even where they exist there’s no real enforcement.  We’ve pushed for even looser restrictions, to open schools for face to face instruction.  We’ve joked that we’re culling the heard, laid off what happens to fate.  At least people do that until someone in their family gets sick.  Chuck Woolery, former Wheel of Fortune game show host, has been on Twitter for months, claiming that the virus is a hoax meant to hurt Donald Trump’s re-election chances.  He became quite the media darling for this, frequently being re-Tweeted by the president and other conservatives.  This week, Woolery’s son became ill with COVID-19, he simply Tweeted it’s here and it’s real, then deleted his Twitter account.

I tell this story to illustrate a simple point, it’s a virus, it doesn’t care about our politics, we are just a host to hit, a vector for it’s transmission.  If we don’t respect what it is, and what it can do, it will punish us, and it has.

This week, amongst rollbacks for restaurants and bars being open, with new mask mandates being put into effect in places where they were previously resisted, we see a sudden reckoning for our laid back attitude about this virus.  As people start to realize that secondary schools are likely not going to be opened this fall, as colleges go to online schedules for likely the entire 20-21 academic year, as college football continues to look like a smaller and smaller and maybe no season, as all of these things that we thought for sure would just be back to normal by this point aren’t.  We may finally be getting it?

So wear a mask, wash your hands, do the things you’re supposed to do.  And I won’t even suggest you do it for others.  Selfishly, do it for yourself, your family and the people you love.  Do it so that the mythical someday of normal life comes to pass sooner than later.  But realize, that time is not weeks away, it will need to be measured in months and likely years.  We had a chance for that not to be the case, but as a society we opted to be selfish, stubborn and ignore the science.  And this is the new reality we face. ~ Rev Kane

Michael Kane is a writer, photographer, educator, speaker, adventurer and a general sampler of life. His books on hiking and poetry are available in soft cover and Kindle on Amazon.
View all posts by Michael Kane →
This entry was posted in Life in Covid Times and tagged acceptance, cornavirus, COVID, covid times, death, flu, new normal, pandemic, virus. Bookmark the permalink.