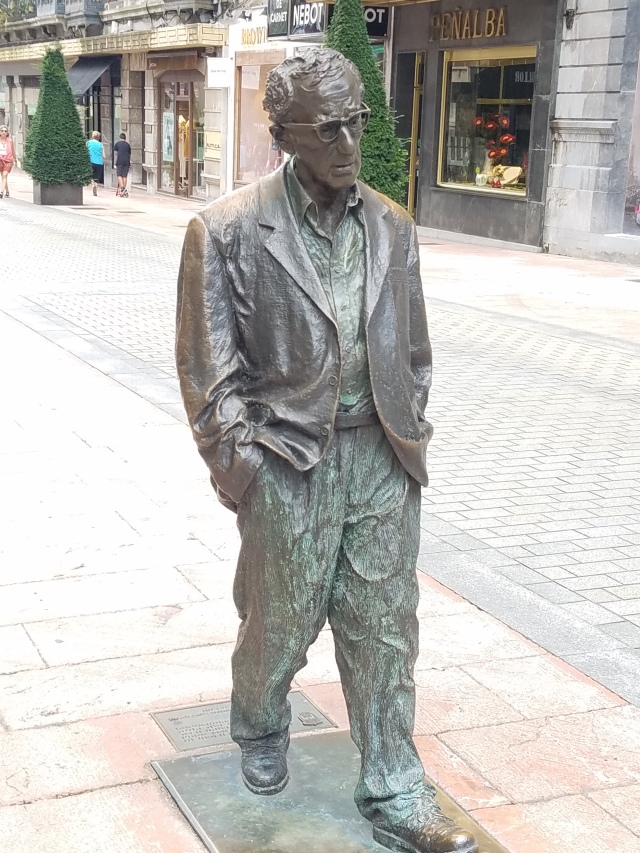 Welcome to Oviedo! Look who was waiting for me.  Apparently since he used Oviedo as a fill-in for his Barcelona film, they built him a statue.

Beautiful train ride once the sun came up.

Rolling through the southern Pyrenees was beautiful. Started out thoroughly confused in Oviedo.  The train station was on the street I thought, just about 5 blocks away. So it took about 15 minutes to get oriented.

My first impressions of Oviedo are that it’s compact and clean, except wow, everyone smokes in Spain.  People seem nice, not that I’m interacting a whole lot.  There is a ton of art here and even some shows in English.

Below I’ll include some shots of the street art and some from San Francisco Park, the big park in the center of town.

On the way to Hotel Vetusta I got a little worried about my accommodation, I don’t think I need to translate that, I mean my birthday is tomorrow but I’m not that old.

Happily this was mine. 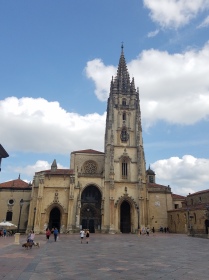 Had a nice lunch at a cafe on the park and now off to checkin and wander a bit. – Rev Kane

Michael Kane is a writer, photographer, educator, speaker, adventurer and a general sampler of life. His books on hiking and poetry are available in soft cover and Kindle on Amazon.
View all posts by Michael Kane →
This entry was posted in 2018 Adventure, personal happiness and tagged adventure, blog, Camino, Church, happiness, hiking, photography, spain, travel. Bookmark the permalink.