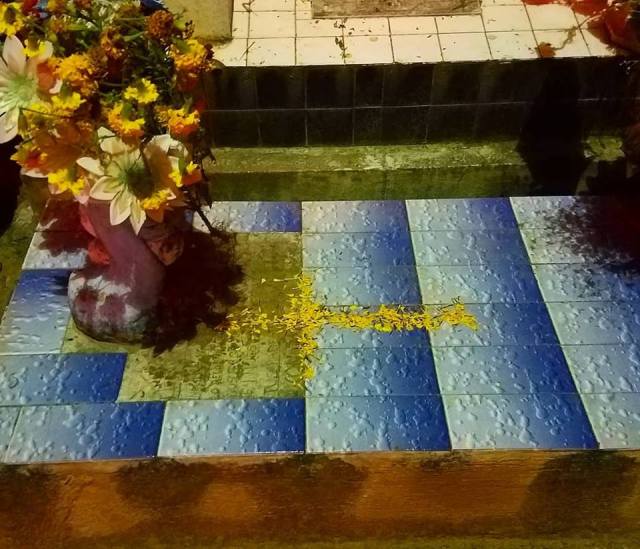 To live in hearts we leave behind is not to die. ~ Thomas Campbell

So last night I did something that I’ve wanted to do for a very long time, I visited a cemetery in Mexico during Dia de Los Muertos (Day of the Dead).  The idea of the holiday is based around that idea that during this time of year, that the veil between our world and the hereafter are at their thinnest point.  As such, spirits from the hereafter can cross over into our world.  In America we’ve turned this into a scary thing, Halloween is all about protecting ourselves from all of the scary spirits we’ve learned about in horror movies and being mischievous.  Heck I’ve had several occasions while working in colleges where people have been upset about Halloween decorations on campus because it’s “devil worship.” And like most US holidays really now it’s just about the merch.

I’ve always like the idea of Dia de Los Muertos much better, the general idea is that given  that spirits may cross over, people invite their deceased relatives to come home.  They decorate their graves and create altars to help bring their ancestor’s spirits to the right place, so they can be with their family for two days.  In this way, as a family member was explaining to someone last night, they don’t lose their ancestors, this holiday helps them stay connected to those who have passed on.

So last night, I did a tour to one of the oldest cemeteries in Mexico, Xoxocotlan.  It’s a small cemetery that I was told is over 400 years old.  The town it is located in is someplace that takes Dia de Los Muertos very seriously and keeps the tradition very faithfully.  So I was excited to get there, of course it was a bit of journey.

Our tour group met, including some really cool German people from Sweden.  That’s a bit of an inside joke, they were a super cool couple from Switzerland.  According to our closest sources of information our correspondent Michelle from the CBC and actor Michael Cera, this whole thing would be a couple of hours, a couple of cemeteries, a little mezcal, bread and chocolate.  Well, the planning was way off, the tour didn’t go to midnight as we’d been told, it was going to last to past 2AM, it wasn’t three cemeteries as billed, but 2 cemeteries and building an altar at someone’s house.  Travel around the area is slow, not helped at all by what seemed like a speed bump every 100 feet on the road.

To be fair the activity period, I didn’t participate in the altar building, did included mezcal, hot chocolate (the Oaxacan,not the American version) and very tasty tamales.  Of course this occurred after our visit to Xoxocotlan and by time it was wrapping up it was after midnight.  A little revolt broke out and about half the group decided to take the vans back to Oaxaca and I joined them.

The logistic fails weren’t the source of my disappointment though, those types of things are expected in a foreign country with people communicating in different languages.  My disappointment was with the visit to Xoxocotlan itself.  It’s a small place and we were told before we arrived that we should be respectful, but that the locals really welcomed the tourist visitors in the cemetery.

When we arrived there were a lot of immediate revelations.  First, this cemetery is really, really tiny with the ruins of a church in the middle.  The graves cover 80% of the ground and it’s difficult to walk between them.  Even more so when you literally add thousands of tourists into the space with a single gate people have to go in and out.  The graves were amazing, people do a magnificent job of decorating and sitting with the graves.  However, my take is people are so thrilled to be invaded by thousands of people while trying to welcome their dead loved ones back home.  Especially not when a lady paying to attention at all knocks over the huge floral display at the top of the grave you’ve decorated.  A couple of people were talking with tourists at their sites, but most sat at their sites looking thoroughly unhappy.  It felt just wrong to be there. 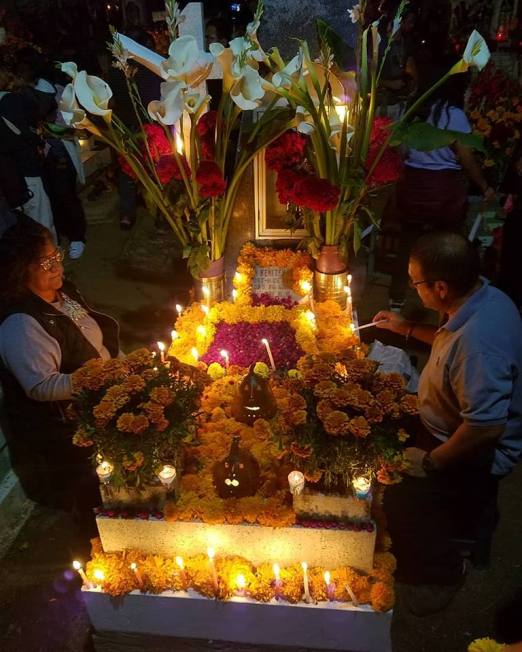 I took some photos while making a loop around the church and headed for the gate about twenty minutes earlier than required.  Meeting up with my Swiss friends and talking about the experience I found they felt very similarly to how I did.  It was disappointing for me after waiting for this experience for so long, but I was truly sad for the families that we and in particularly I had intruded about this time in this fashion.  Some photos below. ~ Rev Kane

Michael Kane is a writer, photographer, educator, speaker, adventurer and a general sampler of life. His books on hiking and poetry are available in soft cover and Kindle on Amazon.
View all posts by Michael Kane →
This entry was posted in 2018 Adventure, personal happiness and tagged adventure, day of the dead, dia de los muertos, happiness, mexico, oaxaca, photography, travel, xoxocotlan. Bookmark the permalink.