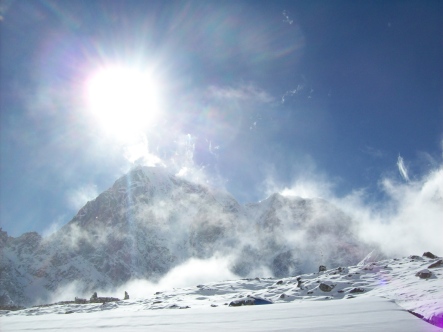 I used to be Snow White, but I drifted ~ Mae West

I grew up in upstate New York and when I was kid I lived on a block with a lot of kids.  We also in some of the years of my youth got massive snowfalls.  This had a lot of advantages.  First, I would hustle and shovel sidewalks, the bigger the snow the better the cash.  It was not uncommon in the mid-seventies as a ten year-old kid to make $20 or $30 in a morning.  You’d make more but, we were in a middle class neighborhood and after shoveling your own, everyone was out trying to make money.  So by noon, we had all made the cash we could make, had eaten a lunch we’d bought with our own cash and were ready to play. 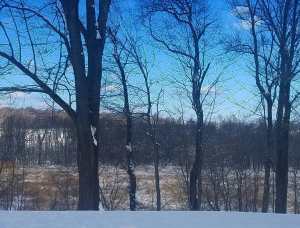 As kids we made snow forts and massive tunnel complexes, we built defenses to hide behind for the inevitable five or six snowball wars that would break out during the day.  We also, we were admittedly juvenile delinquents, throwing snowballs at trucks and cars.  Coming through our neighborhood on a snowy day was like running a machine gun gauntlet in World War II albeit with less serious consequences.  While I have clear memories of being chased and even one time caught, I never remember us actually causing a heart attack or an accident.  Although we certainly provided some adrenaline bursts for drivers.

The older I got the less fond my snow memories become.  Once you’re driving and you own a car and you actually care what your clothes look like winter and especially the transition to spring (mud season) start to lose their charms.  Winter becomes more about trying not to crash your car, I failed once  really spectacularly, and trying to keep your work clothes clean and dry.  The snowball fights, forts and tunnel times have been left behind.  There were a couple of good things to winter when I was older, skating and hockey as well as snow sculpting contests  in college.  But they were certainly outweighed by the work and annoyance of winter and while in the Adirondacks the unbelievable number of sub-zero winter days. 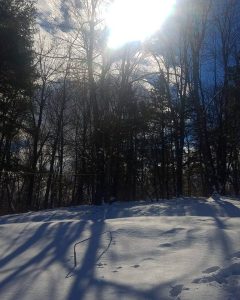 So by time I’d finished my undergraduate degree I made the following, the criteria for my choice of schools for my masters degree.  No snow, not cold, has an ecology program.  Which is how I ended up at Eastern Kentucky University (EKU).  Granted, not the most extensive or brightest set of criteria but I got lucky, EKU turned out to be a really perfect place for me to get my masters.  Of course it snowed my first semester there.  I have vowed never to live in the snow again.  I love the way it snows in California, only up in the mountains, I can drive up, play in it and leave it behind.

This week we got the third snowstorm since I’ve been back in NY staying with my sister’s family.  The last two didn’t have great snow but this storm was awesome.  Good packing snow and a sunny day in the low thirties afterward, so I after I helped my brother-in-law get the placed shoveled and plowed out I decided to play.  It was really great, a throwback to happy snowdays in my youth, without the snowball fights unfortunately, I was really good in those.  But I decided to show my stay in the house and stare at an IPod all day nieces and nephews what you can do with some good snow.

So I built a snowman and put him in snow jail: 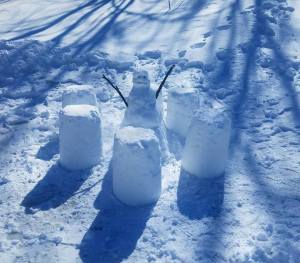 Really should have made those Daleks

Then I did a little snow sculpture to thank my sister’s family for putting me up in between my travels this past year: 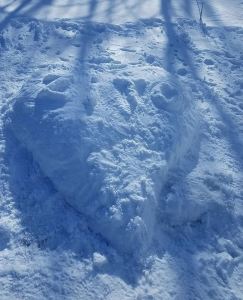 So just a nice little post tonight, a little nostalgia and a couple of pictures, have a happy day my friends, I did.  ~ Rev Kane 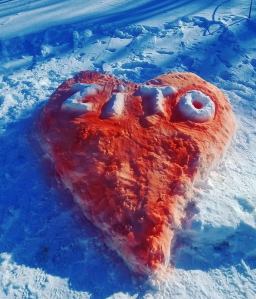 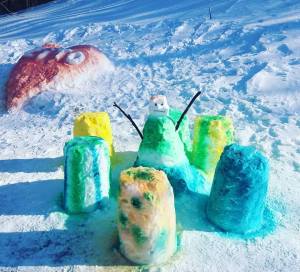 Michael Kane is a writer, photographer, educator, speaker, adventurer and a general sampler of life. His books on hiking and poetry are available in soft cover and Kindle on Amazon.
View all posts by Michael Kane →
This entry was posted in personal happiness and tagged happiness, snow, snow day, snow sculpture, snowday, snowman, winter, winter wonderland. Bookmark the permalink.

2 Responses to A Beautiful Snow Day