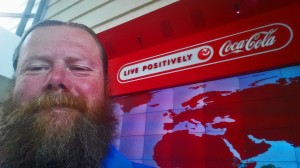 Plenty of people miss their share of happiness, not because they never found it, but because they didn’t stop to enjoy it. ~ William Feather

One of the things I crave the most while hiking on the Appalachian Trail is a cold coke.  There exists a photo of me lovingly hugging a coke machine in Fontana that I hope to show you some day.  Today, while in Atlanta, home of Coca Cola, it made sense for me to tour the World of Coke.

To be honest, the World of Coca Cola, was interesting and definitely would be fun for kids.  The exhibits also would be truly fascinating to people interested in marketing in advertising.  There are my friends, some bizarre forms and icons in the advertising world of Coke.

There were also so really cool advertising exhibits of old signs, exhibits where you could write poems about Coke or even electronically design your own bottle.  This sign was my favorite:

Simple and in neon, easy choice for me.

The 4-D exhibit was lousy, the 3-D images were ok, the movie a bit silly as to be expected.  However the moving seats were ridiculously, seemingly set up to jerk you around, just to jerk you around, they warn you they may hurt your back.  They truly made the exhibit unenjoyable, the little blasts of water and air were interesting effects.  But seriously, Coke has massive amounts of money, they couldn’t have designed and installed a better set of motion seats.  I wouldn’t skip it, but I’d sit in the back, non-moving row.

One thing, also predictable, but I thought was interesting, was the way Fanta was represented.  In Germany during WWII the Coke plants in Germany could not be get Coke syrup from the US.  So they searched around to find other options for producing soda, the creation was Fanta, fruit flavored sodas.  In 1955, Coke reacquired Fanta and made it part of the coke line.  Here’s how that history is covered in the World of Coca Cola exhibit:

All in all it was a nice way to spend an hour and a half, the tasting room is nuts by the way, 101 sodas at your disposal, one named Beverly, from Italy was particularly interesting, I leave it up to you to taste it for yourself.  A Coke fueled happy day my friends ~ Rev Kane

Michael Kane is a writer, photographer, educator, speaker, adventurer and a general sampler of life. His books on hiking and poetry are available in soft cover and Kindle on Amazon.
View all posts by Michael Kane →
This entry was posted in Random Happiness and tagged atlanta, coca-cola, coke, fanta, happiness, history, soda, wolrld of coca cola, wwii. Bookmark the permalink.