Disney World, SeaWorld, Six Flags… All great family getaways. There’s no doubt that, despite the chaotic atmosphere and the overpriced snack stands, a theme park vacation is a must-have experience for every child and thus, every parent. These days, there seems to be a park to suit every interest, from chocolate to construction, Jesus Christ to Dolly Parton. But just when we thought that every void had been filled, the Chinese pulled a fast one with the 2009 opening of Dwarf Empire, an amusement park catering to — and almost entirely staffed by — little people.

Perched on a hilltop in Kunming (about 1,758 miles southwest of Beijing), this small troupe (whose members all measure four feet or shorter) functions as a true kingdom, complete with an emperor and a parliamentary government. According to Travel and Leisure, “The park … gained worldwide media coverage for employing many of the country’s height-challenged, who traditionally have had a hard time finding work. Thanks to the park, many of China’s dwarves are now gainfully employed as everything from janitors to crown-wearing empresses.” The employees all live and dine together on-site in exchange for performing costumed expositions like break-dancing performances and gourd-instrument concerts for hundreds of curious tourists.

Island of the Dolls

Not far from Mexico City is an island that has become one of the southwestern country’s biggest and weirdest tourist attractions. Island of the Dolls (Isla de las Munecas) wasn’t originally intended for curious crowds, but the story of a drowned child and the man who found her and felt haunted by her death has drawn visitors in droves. The story goes that after a child died in a canal, Don Julian Santana saw a doll floating by and hung it from a tree as a way to honor her spirit. He also wanted to protect the island from further tragedy. Eventually it became an obsession, and he adorned the island with broken, creepy dolls. There are many urban legends surrounding his bizarre behavior, but one thing remains truly terrifying. In 2001, Santana apparently drowned in the same canal as the little girl. His family now runs the island as a tourist hot spot, but many are fearful of its haunted past. 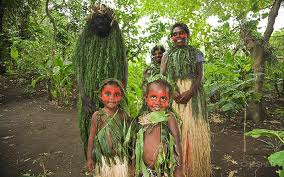 Reverend Michael Kane is a writer, photographer, educator, speaker, adventurer and a general sampler of life. His most recent book about hiking and happiness is Appalachian Trail Happiness available in soft cover and Kindle on Amazon
View all posts by revmichaelkane →
This entry was posted in Random Happiness and tagged adventure, bizarre, fun, happiness, happy, random happiness, travel, vacation, weird. Bookmark the permalink.