Voices from the Past

Voices from the past 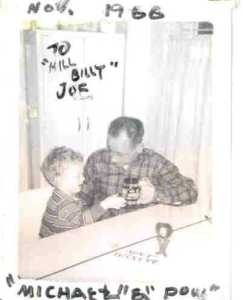 The most beautiful things are not associated with money; they are memories and moments.  If you don’t celebrate those, they can pass you by. ~ Alek Wek

My maternal grandfather and I had a special relationship right from the start, the advantage I think of being the first grandchild.  As my late granny often said, “your diapers were the only ones he ever change, never touched his own kids, but you were special.”  He doted on me, played with me and paid a huge amount of attention to me.  Naturally, we became close, very close and one of the little games he used to play with me when I was a baby was to make a fist and go “pow” when his fist touched me and I would laugh.  So as I started to speak I would say “pow” every time he came near and over time would come to call him Pow it became his family name.  I would hang out with him in his workshop, he’d take me for walks and most famously we would drink together.  Pow, with his mug of beer and me with a shot glass of milk.  We would slam back a drink and then I would yell, “more beer Pow!”  There is family famous a shot of the four year-old me and my Pow drinking at the kitchen table in my grandparents kitchen.  They occupied the first two floors of the house and my parents, myself and little sister lived on the third floor.

Although I was only five years old when my grandfather passed away, I have some specific memories of my time with him.  Once when I was in the hospital, I was frequently sick as a child, I remember waking up to find him and his best friend, my great uncle Joe sitting by my bedside.  I remember vividly that they brought me a bag of cowboys and Indians, very exciting as the cowboys actually sat on the little plastic horses.  I even remember sitting at the table with him drinking “beer” and at times over the years while growing up would from time to time mention details about him that would surprise my family that I remembered.

Several years after my paternal grandfather passed away I remembered some cassette tapes I had of recordings I had made of him and I talking when he was in his late 80’s.  At Christmas one year I had the cassettes turned into CDs and made copies for members of my family.  The effect was amazing, it made me realize something about remembering the dead.  We tell stories, we have photographs so we remember what people did, we remember what they look like, but we most often don’t have any recordings of their voices, so we forget what they sounded like.  The most frequent comment I got from family members was oh my god, I forgot about his laugh.  He had a great rolling laugh. 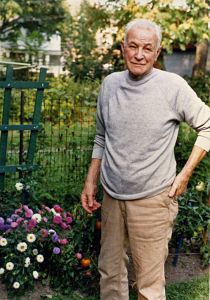 The success of that gift got me thinking about something I had remembered.  My grandfather and great uncle Joe had traded audio tapes back in the early 60s, including exchanging messages with my uncle stationed in Vietnam.  My great uncle had recently passed away and my granny was going to be with his wife, her sister, and help her go through his things and take care of the estate.  I asked my granny to send me any tapes she might find, these were the old reel to reel recording tapes.  She said she had found some and sent them to me.  Unfortunately, these turned out to be old 16mm films, some innocuous, some quite racy.

A few years later my great aunt passed away and once again I asked my granny as she went to take care of the estate to look again.  Once again I was told there were nothing and I gave up hope.  When about a month later a box arrived, full of reel to reel tapes.  The box was a random collection of blank tapes, club tapes of comedy acts and commercial comedy tapes of people like Bill Cosby.  And of course, the gold, the mailed tapes between family members including between my grandfather and my great uncle.

I sorted through the tapes and with no reel to reel player available I sent the tapes to be converted to CD by a company.  When I received the CDs I was excited to click through and listed to the files.  It was awesome to hear the voices of my grandfather, gone for 30 years, to hear my late, great uncle Joe and even my granny when she was much younger.  Then the bigger shocker, on a tape from my grandfather to my great uncle Joe I hear him yell, “Michael, get over here.”  Then there it was, the voice of little three year-old little me, saying hello to my uncle Joe.  It was a difficult and wonderful moment, a moment, I had no memory of, but a moment when I was so young, so pure, so loved.  I could hear the love between me and my POW, so many years in the past.  It brought tears to my eyes, like it does now, it shows the absolute power of voices from the past. ~ Rev Kane

Michael Kane is a writer, photographer, educator, speaker, adventurer and a general sampler of life. His books on hiking and poetry are available in soft cover and Kindle on Amazon.
View all posts by Michael Kane →
This entry was posted in personal happiness and tagged blog, death, family, happiness, memories, memory, remember, the past. Bookmark the permalink.

3 Responses to Voices from the Past