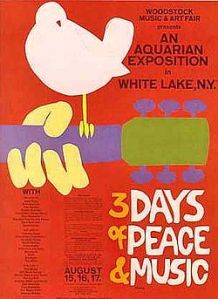 Love and compassion are necessities, not luxuries. Without them humanity cannot survive. ~ The Dalai Lama

A few days ago I noticed on one of the movie channels that Woodstock was being broadcast.  It hit me that although I’ve seen a number of clips and generally actually know the film a bit, I had never actually watched the whole thing through.  So over the last few days I’ve been doing just that in bits of 30 minutes to an hour.  The film has really had a surprising impact on me, you see the world was very different in 1969 and although I get that culture, business and technology change I felt that unfortunately people seemed to have changed as well.  It feels like we’ve lost a level of civility that existed in the late 60’s and early 70’s. 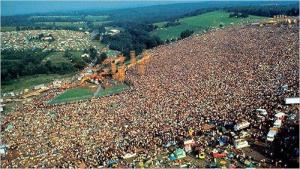 At several points throughout the concert there are quiet songs played by folks like Richie Havens and Joan Baez, including a very quiet protest song by Joan Baez.  She’s playing in front of 300,000 people and you can hear a pin drop, no screaming people, no woohooers, no one just yelling to hear the sound of their own voice.  An actual reverence for the performs and more than that a respect, consideration and compassion for the performer.  I can’t imagine this happening at a concert today; people are far too interested in hearing their own voices, attending to their own needs.

Watching the film if really feels like we’ve lost something in America, which is extra-ordinarily sad when you consider that the Woodstock Generation is now the generation in power in America.  That we’ve lost something feels certain, the question nagging me for several days is what have lost.  The answer I have come to is that we’ve lost common compassion.  Sure when extraordinary events occur, earthquakes, typhoons, etc…we have compassion, we donate money we provide assistance.  But what we seem to have lost is the common everyday compassion for those around us and the impacts our own actions have upon them.  We seem to go through the world ignoring anyone but ourselves.  I think this attitude is most visible in movie theaters, on the road driving, and in grocery stores where people often act amazingly selfishly and get angry if anyone points it out.

I was a five-year old kid living about 30 miles from Woodstock when the festival occurred.  I have one distinct memory of that time and that was seeing the footage of the cars blocking the New York State Thruway, the big highway in this kids life.  I guess that’s why Arlo Guthrie’s infamous, “the New York State Thruway is closed man,” has always resonated with me.  So when they announced Woodstock 94 I had to go and I did.  A friend and I without tickets of course,  hitchhiked and walked into the festival actually hiking down the railroad tracks to evade the roadblocks that were stopping anyone without tickets.  We ended up hitching a ride after the roadblocks with a van full of highly interesting folks down to the festival.  Once there we ended up jumping the fence and camping for the night next to the grandson of Max Yasgur’s grandson and girlfriend.  We shared a breakfast of Kit Kats with a couple from Japan who spoke no English and we wandered on into the throng of people.

It was my first experience with anything that could be called a sea of humanity and it was amazing.  Too be honest, the music was the least of the attraction.  The people, the energy, Joe Walsh just sitting on the ground playing guitar with a little sign that said, “hi, I’m Joe Walsh,” it was amazing.  It was also peaceful, there were a lot of drugs no doubt and very little alcohol by comparison.  However eventually, as happened in 69 eventually the gates were opened to all and the beer runs began, and as the place turned from peace and amazement to stumbling drunks and rain storms my friend and I slipped out and hitched and hiked back upstate in the rain.  It seemed in one day in 94 I really saw the whole evolution of culture from 69 to 94 and quite frankly it was a little bit sad. 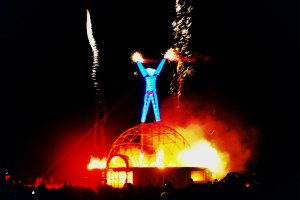 I attended my first Burning Man Festival in 2004 and the parallel I draw between the two is in the attitudes of the people.  On the Playa at Burning Man there is a lot of the common compassion that is missing in our everyday society, people are genuinely kind and welcoming.  In six trips to Burning Man, I’ve never seen a fist fight.  However much as I saw at Woodstock in 94, once people leave the environment they fall back into their rude, self-absorbed everyday selves.

Michael Kane is a writer, photographer, educator, speaker, adventurer and a general sampler of life. His books on hiking and poetry are available in soft cover and Kindle on Amazon.
View all posts by Michael Kane →
This entry was posted in personal happiness and tagged burning man, compassion, dalai lama, happiness, janis joplin, love, music, peace, woodstock. Bookmark the permalink.