Petra is a brilliant display of man’s artistry in turning barren rock into a majestic wonder. ~ Edward Dawson

In the Jordan Desert, there is a 2300 year old city that westerns didn’t know existed until the late 1880’s.  Petra was a trade center 2000 before the United States was a country.  The city is in the desert, entered via a slot canyon called Al Siq.  Most people know the building above because it was featured in an Indiana Jones movie.  I’ve wanted to see Petra for a long time, it was named one of the new seven wonders of the world in 2015 and for good reason.

You enter Petra via the Siq, a gorgeous slot canyon that winds for over a mile on its way into the city.  Before the Siq you pass the obelisk building: 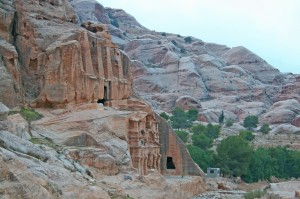 And several Djinn monuments, where people believed the Djinn (Genies) waited as guardians to protect the city. 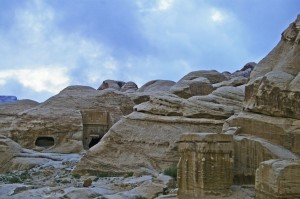 The Siq itself had small dams and plumbing to provide water to the city.  The walls of the Siq were giant carved murals that you can still see small remnants of in the rock.  Paint flecks found in the city hint that the Siq and the city were incredibly colorful.  Where the sand has been blown or washed back you can see the cobbles that paved the way into the city. 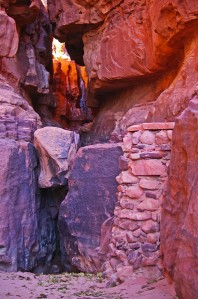 We entered the city on a quiet morning just after sunrise.  My first time walking through the Siq was magical.  Towering walls with light just entering from the edges, it was completely silent, not even birds tweeting.  The rock walls were absolutely beautiful and peaceful, eventually coming through the Siq you get your first peeks at the most famous building in Petra, the Treasury Building.

I was truly in awe of the edifice, it’s absolutely spectacular with incredible color.  Being there early, before the other tourists made it a special time.  I had to reach out and touch a 2000 year-old building. 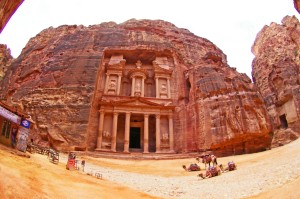 We would leave the Treasury valley by donkey and rode all the way up to the Monastery.  Of course the Donkeys knew to stop at the booth of their owner’s family where my new friend Noel made us tea and tried to sell us all manner of souvenirs.

The donkey that carried me to the Monastery

Me and my Bedouin friend Noel 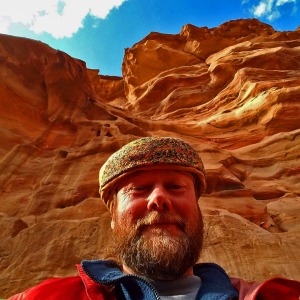 From Noel’s shop we’d climb up to the Monastery.

We would spend the next couple of hours hiking back out of Petra.  The size of the valley is amazing, the number of ruins too many to count and the color of rocks unbelievable. 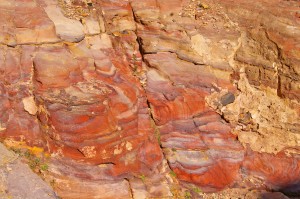 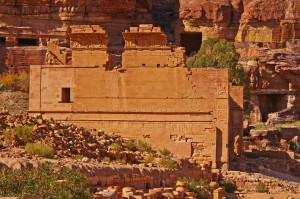 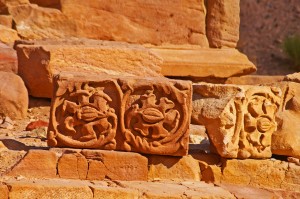 It was truly an amazing day and a the fulfillment of a long-time dream.  Of course we’d come back later for Petra at Night, but that’s another post. Have a happy day my friends     ~ Rev Kane

Happiness is floating on the Dead Sea

My 22 Days in the Himalayas

My Swim with Whale Sharks

Michael Kane is a writer, photographer, educator, speaker, adventurer and a general sampler of life. His books on hiking and poetry are available in soft cover and Kindle on Amazon.
View all posts by Michael Kane →
This entry was posted in Happiness is Adventure and tagged 7 wonders, adventure, backpacking, happiness, jordan, petra, photography, travel. Bookmark the permalink.

4 Responses to Petra: Happiness in a 2300 Year Old City