So a new little writing experiment for the blog. I’ve been wanting to find a way to do some free writing as practice. And I’ve been wanting to capture the moments in my life that have brought me true happiness. I need that little pick me up right now with everything going on in the world and no real chance to travel. So, some writing about happy moments in my life, hope they bring you a little happiness too.

Crosby, Stills & Nash’s music has always held a special place for me, their music has always hit very emotional places for me.  The lyrics in these songs have also always fed my imagination.  As a traveler, songs like Southern Cross and the Marrakesh Express made me long to go to Morocco and into the southern hemisphere where I could see these things.  So, tonight a trio of happy moments tied directly in one form or another to Crosby, Stills & Nash.

A long time ago I was living in Sacramento, CA.  I’m also a horse racing fan and was at Cal Expo for the harness races.  I saw a beautiful woman standing at the rail during one of the races, and she was there for the next as well and really seemed to be alone.  I placed my bet for the next race and decided to be a little bold.  So I walked up and stood next to her at the rail.  I said hi, and as you do at the track asked which horse she was betting.  She told me, and I jokingly told her that she was wrong, I had the race dialed in and told her what I knew the trifecta (1st, 2nd and 3rd in order) would be.  I told her it would pay well and when it came in, I’d even buy her a beer.  She laughed, “deal”, she said.  The horses came around the final turn and were set up exactly as I predicted and came thundering home exactly as I said.  She walked away after the race and I went up to cash in, make my next bet and buy us each a beer.  I came back to the rail and she was nowhere in sight.  I stood at the rail and just as the race was beginning she walked up and stood next to me.  I reached down and picked up her beer and handed it to her.  She laughed, “you really bought me one”, I told her I’d promised.

We would watch the races together and she would give me her phone number before the end of the night.  A couple of days later I called, answering machine.  This happened several days in a row.  At that point, I realized I was likely being blown off and had nothing to lose.  So I started calling her machine and leaving funny messages, she had told me her dogs name and a little about her roommate.  So I left messages chatting with her dog, telling jokes, flirting with her roommate.  I finally got a call back and a date.  I would later find out that the reason she finally called back was that her roommate had given her an ultimatum, either she call me back, or she was going to call and go out with me.

We would date sporadically over about a year, nothing very serious but a lot of fun.  She was amazing, smart, beautiful and had a great outlook on life.  She was always up for an adventure and I always enjoyed spending time with her.  One night I took her to Cal Expo, not the race track but the concert venue, to see Crosby, Stills & Nash.  I have this really amazing memory of having her in front of me, my arms around her singing along to Our House at the concert.  She melted a bit that night and it was probably the closest moment we ever had and was a really simple and happy moment for me.

While in graduate school at the University of Tennessee I was a teaching assistant for an Ecology of the Amazon course.  We would take students to Brazil for ten days, we would lead them around the city of Manaus for several days doing cultural and scientific sites.  We would then take them onto a boat and go up river in the Amazon on the Rio Negro, living on the river for four days.  I did this class a few times and it was always an absolutely amazing experience.  Fishing for piranha, swimming in flooded forests and seeing pink river dolphins.  But one of the most amazing things were the stars at night.  Laying on the deck of the boat or on a beach staring at the sky was simply amazing.  With no light pollution what so ever, there were just layers upon layers of stars in the night sky.

One night we took the students to a really unique place, a floating bar on the river.  Some industrious locals had created a floating bar on top of massive Amazonian tree logs.  It was a small place but they served drinks and some barbecue.  So we went there for dinner and for drinks for those old enough.  My Portuguese was not very good at this point and I spend a large part of the night pecking through a choppy conversation with a couple of Brazilian women.  At one point, two of us went to sit at the edge of the bar’s platform.  Sitting there, looking at the stars my new friend pointed up, and there it was, the Southern Cross, it was clear and bright and wonderful and immediately Crosby, Stills & Nash rang through my mind.  I don’t think I could have picked a more perfect way to see the Southern Cross for the first time.

The CSN song that has most driven my imagination however is Marrakesh Express.  The idea of riding a train, which I love, combined with being in Morocco always drove my sense of wonder.  Combined with the descriptions of the square in the old city, “charming Cobras in the square,” made me long to see Morocco and Marrakesh in particular.  A couple of years ago I made it there.  I had hoped to take the train to Marrakesh but it didn’t work for my trip.  So I flew into Marrakesh, and after spending several days in the old city, including time in Jemaa El-Fna Square I would take the train out of Marrakesh.  The old city was absolutely incredibly and overwhelming and indeed, there were cobra charmers in the square. 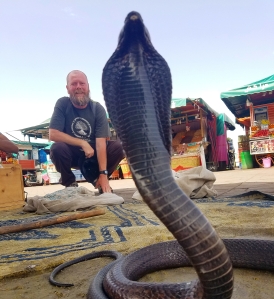 Leaving  Marrakesh I took the Marrakesh Express in reverse, from Marrakesh to Tangier.  On the train I would have the amazing fortune to sit next to a woman named Hannah.  She was a Brazilian traveler who had studied in the US had been traveling in Spain, Portugal and Morocco.  At the same time, I had just been traveling in Spain, Portugal and Morocco.  She would change trains in Casablanca, fitting in itself, and I would go on to Tangier.  But for four hours we talked non-stop bouncing between English, Spanish and Portuguese it was one of the most magnificent conversations I’ve ever had, helped of course by the surroundings, the fact that she was brilliant and beautiful and that we were riding, on the Marrakesh Express.

Michael Kane is a writer, photographer, educator, speaker, adventurer and a general sampler of life. His books on hiking and poetry are available in soft cover and Kindle on Amazon.
View all posts by Michael Kane →
This entry was posted in Happiness Moments, personal happiness and tagged brazil, crosby stills & nahs, happiness, Happiness Moments, morocco, Portugal, spain, train, travel. Bookmark the permalink.