It was night and I could see a large and calm lake, reflecting the moon. Black mountains rose around it. I arrived from between two of these mountains, I looked at the lake and the moon, and that was it, nothing else happened.  ~ Georges Simenon
Traveling is always an amazing thing to me, the simplest things that you do everyday take on a completely new feel in a new place. The Great Glen Way starts in Fort Williams and I arrived there by train and walked up to my lodging for the evening, the Rhu Mhor House, by far the creepiest looking house I have ever encountered, the door answered, of course, by a very old white-haired woman who was expecting me. I really felt like I was in the first scene of a Sherlock Holmes film.

The house would turn out to be fine, a little old, but good biscuits, tea and cocoa in my room and a huge breakfast with the man of the house appearing in his kilt and full Scottish garb. The previous night I made a quick foray into the center of Fort Williams for dinner and at the Grog & Gruel, (yes that was really the name), and had a fabulous plate of Haggis with Drambuie sauce. I also scouted around to find my way the next morning and the entrance to the Great Glenn Way.

Breakfast that first morning was surreal and very good and I also had the good fortune to meet two ladies from France who were also hiking the Glen. The first day was an easy walk along the trail which follows the New Caledonian Canal across Scotland including the impressive lock called Neptune’s Staircase. It was a pleasant first day, twelve miles of walking and a good night’s sleep at the Anoch Mor Hotel. 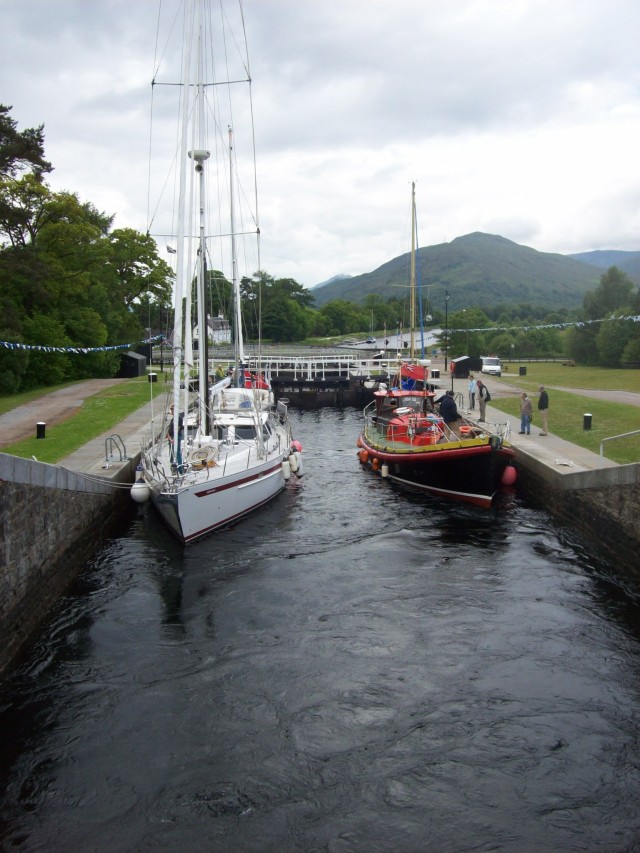 Day 2 on the Glenn, a total of 14 miles walking from start to my resting place was a nice quiet and very flat walking day along the shores of Loch Lochy, which if you translated it to American English would be Lake Lakey, that little thought amused me all day.
I had been in Ireland for two weeks previous to this walk and up to this point had not seen a single day of rain. That may not sound strange to us here in the states, but in Ireland and Scotland that sort of thing is unheard of, and on the Day 3 of the Glen (11 miles) and I finally got a taste of good Scottish weather. I was heading for Fort Augustus on this day and the rain gathered strength steadily throughout the whole day. At the Kytra Lock I ran into a lad from Liverpool who had inadvertently taken the keys to his wife’s car. She was back in Fort Augustus and initially he asked me if I would carry the keys to her, I agreed, but after a quick call and a bit of arguing on the phone he changed his mind. A little while later a car would come driving down the trail and a man stopped and asked me if I had the keys, not quite what I expected to see when I set out on this hike. Coming into Fort Augustus I stopped for a coke and a Venison burger, it’s amazing how good a hot meal tastes when you’ve been walking in the rain for several hours.
Day 4 on the Glen, a short little 9 mile hop and a great night’s sleep at a beautiful little home where the owner dried all of my clothes for me and set out a really wonderful breakfast in the morning. Though if you ever go to Scotland, prepare to eat a lot of toast, I think the fewest pieces of toast I was ever brought at breakfast was 4 half-pieces and usually it was 8 and I was always asked if I needed more toast. The morning breakfast was eaten with an Australian Special Forces soldier just off of back-to-back tours in Iraq and Afghanistan. He was a truly fascinating guy with some amazing insights to what he’d just been through. 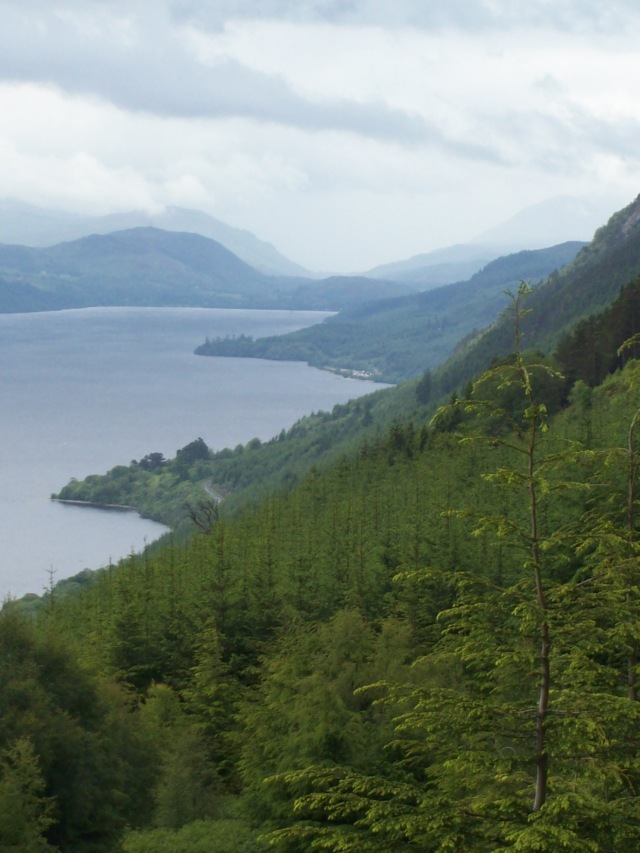 Day 5 on the Glen, a 14 mile walk to Drumnadrochit the Loch Ness Monster capital of the world! Of course after having the typical wonderful and huge breakfast I headed out and then up the biggest damn hill I’d ever seen. It was an hour and a half walk at a massive angle, a 2000 foot elevation gain and the craziest thing is that it was up a paved road. I can’t imagine driving up or down this road in the rain, unbelievable. The rest of the day was a wonderful walk along a rail line of an old country estate, back up into the hills with some great views of the loch below. Finally a drop down into Drumnadrochit and my extra day to tour the two competing Loch Ness Monster museums and unfortunately I have to say, I wasn’t impressed with either.

During my extra day I did however walk down and tour Urquhart Castle it was an impressive place and was just incredible cool to be someplace I’d seen my whole life in photos. For those of you who are not Loch Ness Monster junkies like me, Urquhart Castle was the place where in the 6th Century Saint Colombia after finding the locals burying someone who had been killed by the monster sent one of his assistants into the water to swim across.

The monster appeared and St. Columbia commanded the monster to go away and the monster retreated as if pulled by ropes. Urquhart Castle is the shot always shown in any footage dealing with the monster. All in all a great day in Drumadrochit. 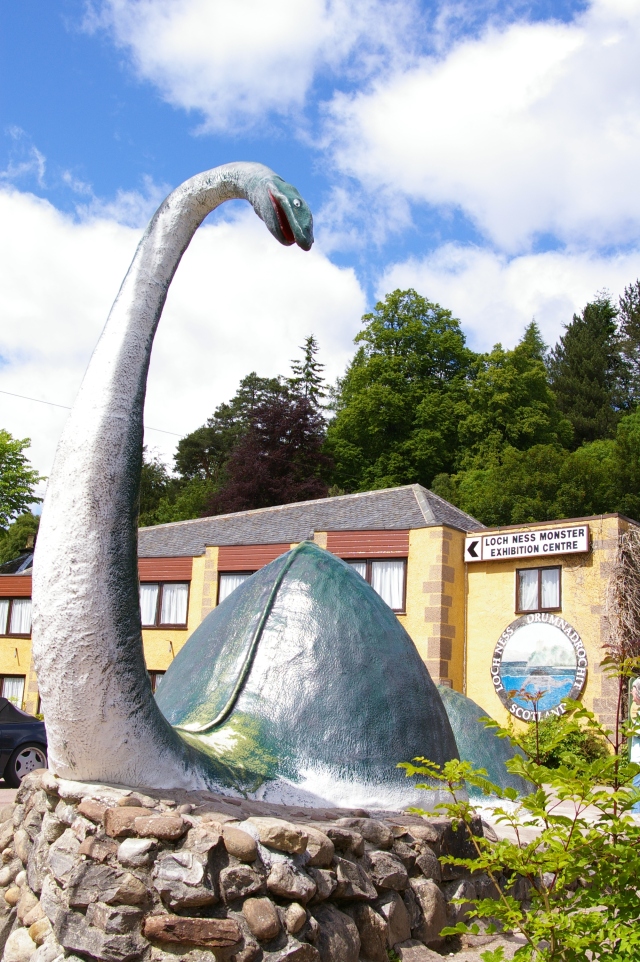 Day 6 on the Glen, the last and longest day, a 20+ mile day to the endpoint in Inverness and also the highest point on the trail, 1245 meters (4084 feet). The day started with a series of long climbs but after a couple of hours and hitting the highest point it was a pretty flat run overlooking Loch Ness. Seeing Inverness was a beautiful sight from the trail.

Finally I walked down and made my way to the official endpoint of the trail at Inverness Castle and then across the street for a lovely glass of Scottish Whiskey. My first multi-day hike was a success and gave me some confidence for the big hills but I knew I’d need altitude work, so off to Utah. In transitioning back to the states I passed through Edinburgh, a truly wonderful city but the weirdest thing of the whole trip happened, walking the streets of Edinburgh I hear my name look up and see a friend from graduate school I hadn’t seen in years and here’s a pic of us on the streets of Edinburgh.

Michael Kane is a writer, photographer, educator, speaker, adventurer and a general sampler of life. His books on hiking and poetry are available in soft cover and Kindle on Amazon.
View all posts by Michael Kane →
This entry was posted in personal happiness and tagged adventure, appalachian trail, backpacking, great glen way, happiness, hiking, loch ness monster, scotland, travel, trekking. Bookmark the permalink.