On this day the group will be leaving to go over the Renjo La Pass (17,800) feet and down into the Thame valley. I had been thinking a lot about the pass, I’m not a good descender and there was a possibility that the descent would be icy and I just wasn’t feeling confident about it. The last thing I wanted to do was talk myself into a fall so I made the decision to go back down the Gokyo Valley and to Namche with a plan to meet the group in three days in Mende. My friend Phillipe had not been feeling well and he decided to make the trip down with me and one of the guides, Lhakpa. Breaking from the group meant no Yak support and so instead of light day packs we were carrying full packs, still not a ton of weight but definitely more than we had been carrying up to this point. 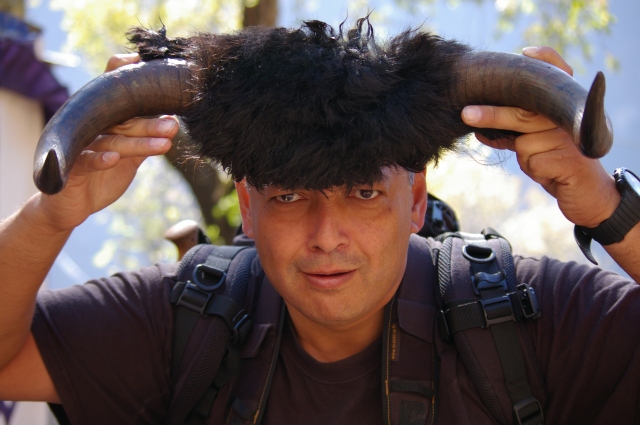 It was a sad morning saying goodbye to the group and we watched them as long as we could as they slid up the side of Gokyo Ri, heading for what looked like an impossible path to reach a notch in the mountains. Finally it was time for us to go and we retreated down the Gokyo Valley, this time staying on the opposite side of the river which gave us new villages and vistas. We were heading for Dhole but our first stop was at Machermo a place I was very excited to be getting to. Why you ask? Well on the maps of the Khumbu Valley there is a notation at Machermo, “site of Yet attack in 1974, 3 yaks killed and woman thrown in stream.” Being as interested as I am in the Yeti, Machermo was certainly a high point on the trip for me, unfortunately I’m unable to locate my Machermo photos at this time, but they weren’t that exciting, just me by the village sign. The other thing both related to the Yeti and very interesting was the area just outside of Machermo, for the first time on the trek we found ourselves walking through actual forest including something that looked a lot like Spanish Moss on the trees. This really seemed like the first habitat we encountered that could actually support a large creature like the Yeti. For more on the Yeti check out the link below:

We made Dhole (13,254) in the afternoon, it’s a sleepy little village and we had a great afternoon sitting in the sun, having a beer and watching crows stealing food off of the packs on the backs of the yaks coming through the village. The lodge at Dhole had very little heat in the common room and none in the sleeping area and it may have been the coldest night of the trek. Getting up at 3AM to urinate and the water in the squat toilet was actually frozen, I was very thankful for my mummy bag that night it was going to be a cold morning. ~ Rev Kane

Michael Kane is a writer, photographer, educator, speaker, adventurer and a general sampler of life. His books on hiking and poetry are available in soft cover and Kindle on Amazon.
View all posts by Michael Kane →
This entry was posted in Appalachian Trail (AT) Happiness and tagged backpacking, bigfoot, everest, happiness, hiking, macheermo, trekking, yeti. Bookmark the permalink.