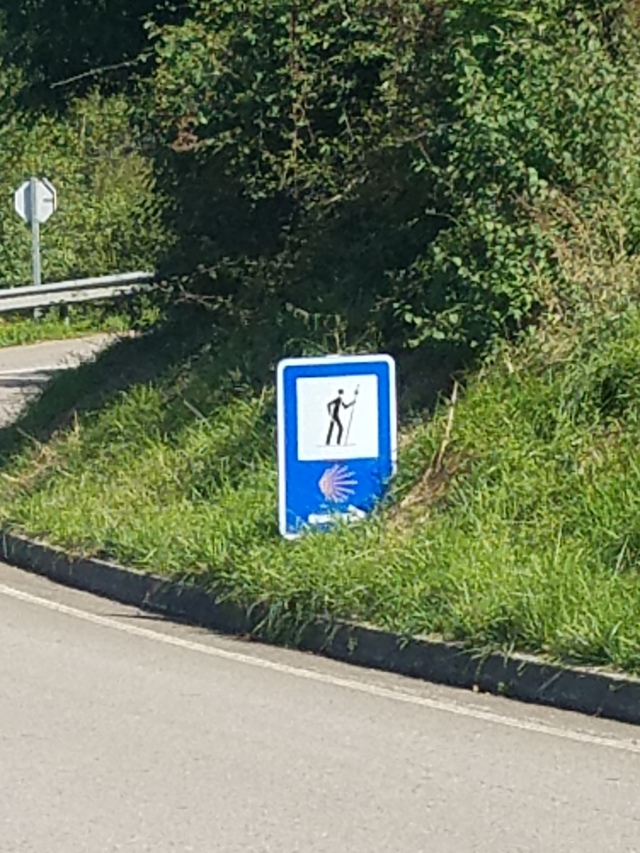 A little more regular of a hiking day on day 2, up in the dark, got ready and out the door about 8:15. Misty morning, pretty but was burning off and knew it would be a warm day.

A bit out from the albergue the trail left the main road for a smaller road. I heard a dog barking, behind a fence, have I mentioned their love of big dogs here.

This one was actually a total sweetheart

I could see a really big dog (150 lbs) and he was barking and about 50 meters away I realized he was in front of, not behind the fence. He was also starting to come my way.  I backed off to where he was comfortable and started to assess my options. Couldn’t hop the fence and go right that’s where he lived.  Couldn’t hop and go left there was no way through.  So I started looking at my GPS to see what around by road looked like and it was about 3 miles.  The dog was barking the entire time, and then I heard a gate click, and about 30 seconds later and old dude, hands behind his back came whistling into view and nodded to me. He had put the dog behind the fence and shut the gate, he strolled away as I moved forward.  Bizarrely, the yard was overrun with cats climbing around and over the fence had to be a dozen, it was all a bit surreal.  The old dude was nowhere in sight so I loudly said, “gracias amigo,” as I went by.  The dog had been barking but as I got closer moved off, I was relieved when just as I was almost completely past he came snarling and flung himself into the fence trying to get at me.  My feet went straight off the ground and the adrenaline surge easily helped me cover the next mile. Not a good start.

Even more than the first day, except for some connecting paths, we spent most of our time on roads and concrete paths.  Even the connecting paths wound by farms and past people’s back doors.

Coming through one little town on a road I heard a dog barking from inside. Ironically a huge untethered dog lay in the driveway and never even looked at me.  I was a 100 yards past the house and a vehicle was coming up behind me.  As it passed the house fido found his way out and chased the car which he gave up just in time to be close enough to go for me now.  I stomped at him yelled and scared him off but had my second morning adrenaline boost, hell who needs coffee on the Camino, happily he had only been an 80 pound dog. 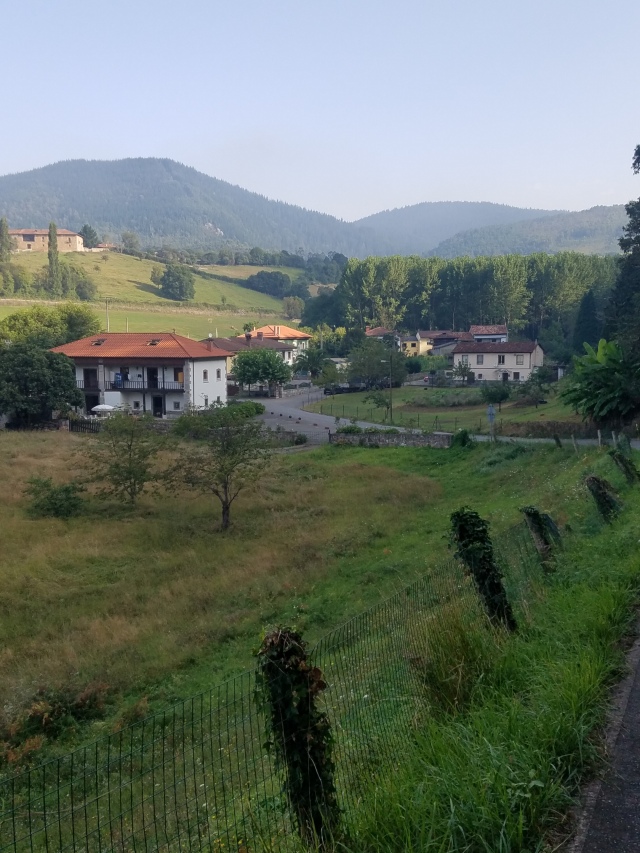 My head really started working now, maybe I should up my mileage, knock the trail out in fewer days.  Hell I have to have exceeded my Camino dog quota by now.  More roads did not improve my mood, neither did it getting warmer, or the pricker bush I accidentally leaned into.

Now I know how on a trail a day can spiral out and I started working on improving my outlook. I focused on things like the flowers I saw, a house built with a rockface running through it.  I made sure to eat and keep my blood sugar up, even pounded a coke. I kept reminding myself of a saying from the Appalachian Trail, never quit on a bad day.

I was heading for Grado, a town of 10,000 and a place to get supplies. I had myself convince to run the trail to Salas before making any decisions, that would be day 5.

Then another diversion, so instead of walking down along the river, we were doing the last couple of miles into town on the main road.  It was also getting warm.  Entering the edge of town we came upon some autoshops and as I went by the first one a dog burst out between two cars growling and coming hard at me.  He was both the smallest (40 lbs) and most determined puppy of the day, to the point I almost had to hit him with a trekking pole, which even at this point, I did not want to do.

This was my breaking point, baseball rules, three dogs and you’re out.  I walked about another half mile and saw some shade by a grocery store. I dropped my pack and sat down in the shade.  My phone dinged, the market gives customers one hour of free wifi.  I took it all as a sign, I checked, the train station was a quarter mile away, a train to Oviedo was leaving in a half hour.  There were places worth seeing and staying at the beach in Gijon a couple hours away.  I pulled the plug, reserved rooms, as I was about to head to the train station my wifi time expired.  Just as I had loaded the walking directions.  I got up and my two English friends came strolling up. I told them the news and we got a drink together before I jumped on my train back to Oviedo.

I’m not a superstitious man but as I mentioned in a post recently I’m trying to go with the flow more right now, not be so rigid and planned, see what the universe has in store for me.  Sure that’s all a bit hippy dippy but what the hell, I’m on an adventure.

Fact is I wasn’t feeling the Camino, sure it was only two days but it already had confirmed my concerns about a lot of road walking and the urban nature of the trail, another 12 days of doing the same thing was only going to prove I could do it for 14 days.  I didn’t need the proof, the trail is easier than the ones I just came off of in Scotland.  The decision in the end was to push for smiles and not miles.  I felt good making the decision and still do.  Tomorrow I head to the beach for 5 days to do nothing.  Honestly these will be my first truly unscheduled days in two years. I plan to do nothing but walk and sit on the beaches, watch surfers, eat seafood,  stream some Netflix, take a few pictures, do a little writing and see what comes my way or maybe just lay in the shade by the ocean.  Somewhere in there I’ll figure out where I’m going next.  I need to be in Lisbon by September 16th to fly to Morocco, so I’ve got some time to wander and have some more happy days my friends. – Rev Kane

Michael Kane is a writer, photographer, educator, speaker, adventurer and a general sampler of life. His books on hiking and poetry are available in soft cover and Kindle on Amazon.
View all posts by Michael Kane →
This entry was posted in 2018 Adventure, personal happiness and tagged adventure, backpacking, behappy, Camino, happiness, hike, hiking, spain, travel, walking. Bookmark the permalink.