Posted on July 5, 2019 by revmichaelkane

Rev Kane and a hiking friend

I don’t look like a Reverend, or a Dean or some people may argue I don’t even look like a nice guy.  Looking not much differently than in the picture above I was once kayaking at Moss Landing near Monterey, CA.  I saw a woman in another kayak start to paddle my way, stop, start, stop and then finally with great resolve paddle straight at me.  I found it odd and eventually she pulled up alongside me and said hello.  She was a volunteer who talked to people about the various species in the area and answered questions.  After I’d explained I was an ecologist and likely more trained than her, she smiled and said goodbye.  Then, she stopped and told me that coming up to me was her big challenge for the day.  I looked confused and she told me she was completely intimidated and afraid of me because I looked so mean, and that coming up to me was an act of bravery and she was so happy that I turned out to be so nice. 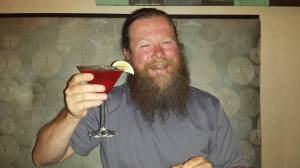 Our perceptions are often wrong and my atypical appearance given the titles I possess often confuses people.  We must overcome the reactions to our initial perceptions and look a little closer.  I truly believe that seeing the world as it is, instead of how we believe it to be will bring us closer to happiness because it brings us closer to reality.  The reason I decided to talk about this tonight was because recently I’ve had a string of these type of interactions, so I thought I would share as a way to remind all of us to guard ourselves against our own misperceptions.

I was in the grocery store recently and ran into a woman I work with and she was with her young daughter, probably 3 or 4 years old.  I said hello and the little girl got shy and wrapped herself on her mother’s legs.  As I passed by she said to her mother, “was he a boy or a girl?” Her mother said, “Mr. Kane is a boy,” “but I thought only girls had pony tails,” the little girl replied.  I laughed.  I found it funny because she’d asked if HE was a girl and although I have a full beard, apparently the pony tail had more power.  I like that my confusing presence has opened her little world a little bit. 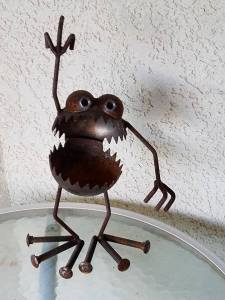 The little statue I have pictured above is one of my favorite pieces of art that I owned.  Recently my landlord’s wife was admiring it, telling me how much she liked it.  We talked about the artist a bit and suddenly she says, “oh, God, it’s flipping me off I hadn’t seen that.”  She was suddenly no longer interested in the piece.  I thought it was cute that because the piece was aggressive she suddenly found it ugly.  Same piece, just another perspective, another perception and everything was different.

Watch your perceptions my friends, look for truth and have a happy day. ~ Rev Kane

Happiness and the Benefits of Gratitude

Happiness is a Choice

Writing Away the Darkness

Reverend Michael Kane is a writer, photographer, educator, speaker, adventurer and a general sampler of life. His most recent book about hiking and happiness is Appalachian Trail Happiness available in soft cover and Kindle on Amazon
View all posts by revmichaelkane →
This entry was posted in personal happiness and tagged art, blog, happiness, kindness, life, perceptions, perspective. Bookmark the permalink.