Things aren’t always what they seem

Posted on July 8, 2019 by revmichaelkane

Things aren’t always what they seem 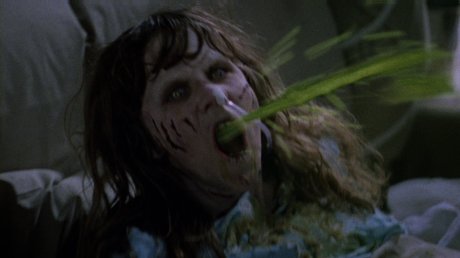 But remember that good intentions pave many roads. Not all of them lead to hell. ~ Neal Shusterman

So, the image above may not strike you as something you’d see on a happiness blog, but stick with me, there’s a connection.

The Exorcist was released when I was nine years-old, I remember my mom going to see it with a friend.  That day she’d made a big pot of pea soup, as you can tell from the image, a choice that would turn out to not be the best idea before seeing that particular film.  It would be a couple of years later before I would finally get to see it.  This was the early 70’s and it was an R rated movie.  I can’t exactly remember if the first time I saw it was our first VCR player, HBO or if I convinced my mom, or a friend’s mom to let us see it in the theater.  But I loved it and found it to be the scariest film I had seen up to that point.

Shortly thereafter one night, I was happily sleeping in my bed when suddenly, just like in the movie, my bed actually levitated and began to shake violently.  Being woken up that way was utterly terrifying.  And seriously, my bed WAS levitating and bouncing around, I began screaming, my mother rushed into the room and I could see on her face was a bit shaken as well, at least until she saw the tail.  You see our dog was terribly afraid of loud noises like thunder and there was a storm going on.  He had decided that safety was under my bed and he didn’t quite fit.  So when he crawled under, violently shaking he actually lifted the box spring off the floor so my bed seemed to be levitating.  Now that I was awake, he of course decided safety was in the bed with me, but that was ok, he was a great, if a bit nutty, dog.

The point of this story is that no matter how intense, how convinced you might be of something, it’s always important to a breathe and consider all of the possibilities.  We all encounter things in our life on a regular basis that tweak us off.  Something is written or said to us, that in the moment, we interpret as being meant to be offensive when, upon further reflection, we realize there’s another possible explanation.  I think it is also important that we be careful that we don’t look for things to offend us.  If we can, in general, assume people have the best intentions, we can reduce the amount of stress in our life that way.  Sure, we’ll be wrong sometimes but we’ll be less stressed and have happier days my friends. ~ Rev Kane

Reverend Michael Kane is a writer, photographer, educator, speaker, adventurer and a general sampler of life. His most recent book about hiking and happiness is Appalachian Trail Happiness available in soft cover and Kindle on Amazon
View all posts by revmichaelkane →
This entry was posted in personal happiness and tagged be happy, best intentions, blog, happiness, happy, rev kane, the exorcist. Bookmark the permalink.

1 Response to Things aren’t always what they seem