I’m lucky that in my job during the Summer we work four days a week, ten hours a day.  Unfortunately, Summer is running out for the college calendar and next week will already be my last free Summer Friday.  I suddenly had this realization last week, and determined to make my last two Fridays count, so I decided to use this past Friday to go whale watching.

The flat mark is the slick left after a whale dives 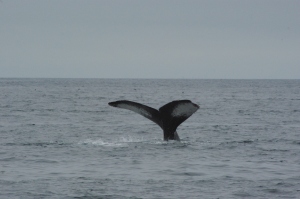 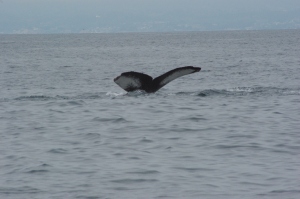 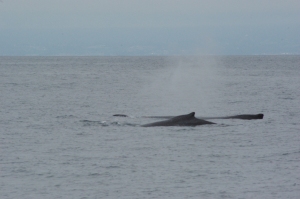 I used to go whale watching fairly regularly when I lived near Monterey, CA and so on Friday I headed back down that way, Moss Landing to be specific, and set out with Sanctuary Cruises. 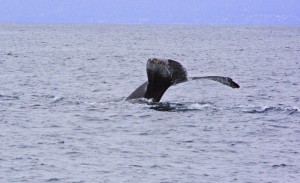 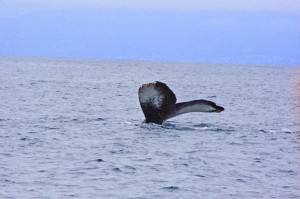 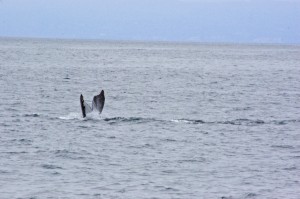 Whale watching like any nature related activity requires patience, and it was certainly tested on this trip.  What was supposed to be a two hour trip started to get tentative once we were a full hour and fifteen minutes into the trip and still heading out away from the coast.  It was a wonderfully flat day on the sea with some cloud cover and the temperature was nice.  Everything was great, just no whales.  We did see a couple of harbor porpoises but nothing else.  It started to seem like we would end up turning around and seeing nothing when someone yelled two o’clock.  There off the starboard bow were a couple of humpback whale blows.  It would turn out to be four animals and we would get about a half an hour of observation as we followed them around.

On any whale watch, whales aren’t the only attraction.  On the way out of the harbor we saw otters 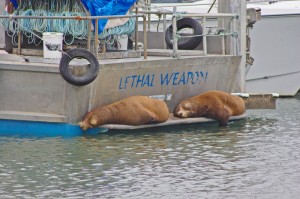 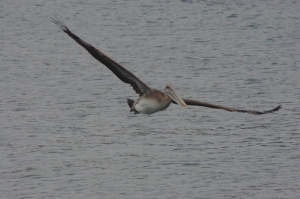 and most excitedly on the way in we saw a flock of 60,000 shearwaters.  These birds who travel the Pacific in these giant flocks from time to time get sick.  One year, as the flock was ill, the birds skidded in land to a town named Capitola on the California coast.  They were everywhere, disoriented and slamming into buildings and windows, birds filled the town, it was damn near apocalyptic.  And in the middle of it all was a man named Alfred Hitchcock.  Seeing this massive flock I absolutely believe that story as the inspiration for the movie The Birds.

I think I was meant to be a pirate, or a sailor at the least.  My paternal grandfather’s family were fisherman in back in Ireland, I truly think some that has soaked into my genes.  I feel peaceful and calm on the ocean, it’s one of the few places where I feel I absolutely belong.  But as Jimmy Buffet so eloquently put it, I’m two-hundred years too late.

There are activities and places where we all feel peaceful and calm my friends.  It’s important that from time to time that we visit them, they are important for our souls and our happiness, have a happy day my friends. ~ Rev Kane

Michael Kane is a writer, photographer, educator, speaker, adventurer and a general sampler of life. His books on hiking and poetry are available in soft cover and Kindle on Amazon.
View all posts by Michael Kane →
This entry was posted in personal happiness and tagged adventure, be happy, california, happiness, happy, humpback whales, ocean, whale watching, whales. Bookmark the permalink.

2 Responses to Whale Tails and Happiness