Autumn is a second spring, when every leaf is a flower. ~ Albert Camus

This evening no big lessons, no great realizations just simple gratitude over a really nice day during my favorite time of year.  It’s officially finally fall, my favorite season of the year.  I grew up in the Northeast and always absolutely loved this time of year there.  It was always a time for me to get out into the woods.  Even though you would still get the occasional warm day, the humidity was gone.  Walking around, the bugs that swarmed you in the summer woods were no longer there.  The trees begin to give back, whether in the form of acorns for wildlife, apples or even just exploding leaves of color, fall is a season for trees to shine.

Fall also means football and although I never played organized football I really enjoy watching it.  It’s one of the few sports where I enjoy both the college and professional levels of the sport.  The teams I follow are absolutely awful this year but I still enjoy watching them.  I even write a fan blog about my favorite professional team, the Pittsburgh Steelers, called Jack Lambert’s Toe.  I became a Steeler fan in an interesting way, when I was 8 years old (1972) I went to a Mets – Pirates game at Shea Stadium.  In the bottom of the ninth, the Mets, down by 1, had a guy on first, two out and Rusty Staub at the plate.  Staub hit a line drive sure walk-off homer to right field, Roberto Clemente climbed the right field wall, stole the homer and saved the game.  I was instantly a Clemente fan and by default the Pittsburgh Pirates.  Sadly, Roberto Clemente died later that year, while bringing relief supplies to Nicaragua after an earthquake.  He had coached a Puerto Rican all-star team there and had lost friends, he wanted to help and lost his life in the attempt, he was a great man.

Fall on the AT

So fast forward a few months later and I’m playing Nerf basketball in my bedroom with my friend Jimmy.  He was a couple of years older than me and at some point asked me who my favorite basketball team was, I told him I didn’t have one.  He informed me that I was a guy and that as a guy, I was required to have a favorite team in every major sport.  I can feel the eye rolls, we were stupid kids in the early 70’s with the ideas of masculinity that existed back then.  Since I’d been to a Celtics game they became my basketball team.  I used to watch the Islanders on Channel 9 WWOR out of NY, so I became and Islanders fan.  Finally, for the NFL, I’d never been to a game, I hadn’t watched any on TV other than the Jets and even then I knew the Jets weren’t very good.  So, I had the Pirates and settled on the NFL team from Pittsburgh, the Steelers. That year, 1973, the Steelers came in second in their division.  Over the next 5 years they would become arguably the greatest dynasty in the history of the NFL.

So, even though it is often hard to tell it’s fall in San Francisco, it wasn’t today.  It was one of those quintessential fall days.  Today was 60 and sunny, there was a little breeze that coolish breeze that makes things just a tiny bit crisp.  I got up early and ran a couple of quick errands and headed for Mori Point to do my normal Sunday morning hike.  But today, I ran smack dab into Fogfest.  This left me parking a mile or so from the beach and strolling through all of the festival booths, bands, food and vendors.  It was a lovely little festival, so I changed up my walk and never quite got to the Mori.  Instead I took advantage of the lower number of folks down at the beach away from the festival.  I walked out on the commercial pier and hung with the fishers.  Took a stroll along the beach and watched some waves.

I came home to watch the afternoon football games and to cook, something else I love to do.  A faculty member had gifted me some okra so I made gumbo and I must say it may be the best batch I’ve ever made.  I can’t describe the taste I’m after with my gumbo, but the best I can do is a slightly seafoody sweet taste with a significant afterburn.  I nailed it today and I can’t wait to eat some more tomorrow, gumbo often tastes better after sitting overnight, the flavor seeps even more deeply into the okra, shrimp and sausage.  I also chopped up a really nice bunch of basil I bought at the farmers market so my apartment smells of fresh basil. 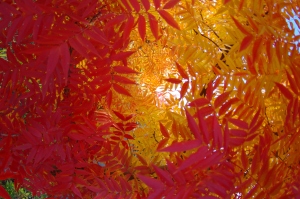 All in all, just a really nice fall Sunday.  A peaceful easy day filled with things I love.  I hope you had a happy day as well my friends. ~ Rev Kane

Michael Kane is a writer, photographer, educator, speaker, adventurer and a general sampler of life. His books on hiking and poetry are available in soft cover and Kindle on Amazon.
View all posts by Michael Kane →
This entry was posted in personal happiness and tagged Autumn, be happy, cooking, fall, fogfest, gumbo, happiness, hiking, ocean, walking. Bookmark the permalink.