The beautiful spring came; and when Nature resumes her loveliness, the human soul is apt to revive also. ~ Harriet Ann Jacobs

It was time for an adventure and the one I had set my sights upon was Havasu Falls on reservation land just outside the boundaries of the Grand Canyon.  I first discovered this place on an online post, one of those bucket list places post.  The comments people made about it were that it was one of the most beautiful places they’d ever been.  I will say that I agree with that statement.  I’ve been all over the world and the falls and rivers at Havasu are some of the most beautiful I’ve ever seen.  I’ll be following up tonight’s post over this week with some posts containing a lot more photos, including one of my favorite photos I’ve ever taken.  It took me three weeks from when the permit phone lines opened, calling multiple times per day, in order to get the reservations but the effort was well worth it.

The trip started at the Hualapai Lodge about 70 miles from the Hilltop trailhead.  I drove out of the lodge at 4:30 in the morning.  I’d read lots of comments about horses and cows on the road and that it was really advisable to take the road more slowly than you could.  I did see some cows, happily off the road.  However, the road should be named suicide rabbit run.  There were no less than five jack rabbits that attempted suicide by car as I drove.  I’m happy to say none were successful and that I saw one of the weirdest things I’ve ever encountered on that road, a bat.  A bat that was sitting on the road and leapt up into flight as my car approached.  Otherwise the road was uneventful and I eventually had to pull over to shoot an amazing sunrise.

I hit the trailhead and checked in, I didn’t realize you needed to check in there but the very nice lady smiled and mentioned the potential for weather and recent mountain lion sightings as a reason for the dual check in.  So good luck with the flash floods and predators!  I’d realized the night before I’d forgotten my rain gear and I was eyeing the clouds.  I was happy they were there to keep the sun off me but they really looked like they were dissipating.  The hike in and out of Havasu Falls is a 10 mile run each way.  On the way in it’s a 2400 foot descent, a good thousand foot or so drop in the first mile and a half, and then an easy downhill run the rest of the way.  So of course, uphill all the way out, with a really good climb at the end.  Essentially a helluva quad workout on the way in and a glute fest on the way out.

Eight miles in you hit the Supai village where you happily find a store, a cafe and the tourist office where you need to check in.  The village is a fairly typical remote reservation village.  So unfortunately a good deal of poverty and trash and lots of roaming, begging dogs.  The tribe members involved in the tourist trade are quite friendly, but the rest of the tribe members are a bit aloof.  This isn’t surprising, I mean can you imagine having thousands of people coming to camp in your backyard all year-long, many who unfortunately are not as respectful of the sacredness or majesty of the place.  It has to at some level be a tough existence and I’m grateful that the tribe keeps the area open to the public.  I’m not sure I’d be so generous in their shoes.

As anyone who has hiked with me knows, I’m great on complicated trails but often, I mean really far too often, get lost on the easiest of trails.  So yes, I got lost leaving the village, I absolutely saw the sign to the campground, got distracted and went the wrong way.  I crossed over a lovely little bridge and ran into an old man from the tribe.  I asked, “which way to the campground?” He stared at me blankly, “this way to the campground I pointed?”  Finally after looking at me with a look that said, “what the hell are you doing here?” He said, “yeah, down that way.”  I got similar looks from people in the yards of the houses I past and finally pulled out my map and realized my error.  I saw that there was a loop trail that crossed back to the campground and made my way back to the right trail.

A short time after crossing the river again I got my first glimpse of the pools above Navajo Falls and was absolutely stunned.  Then I tripped and the buckle on my pack’s strap exploded.  So it was MacGyver time and after getting my pack rigged up I moved on down the trail which followed along the river to Havasu Falls. 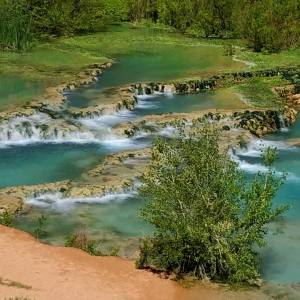 I made my way down to the campground and as you come down the hill you look to the right and get the view in the first picture.  The falls are magnificent and in a good rain year are flowing really well.  I made my way down into the campground and saw the first thing I wish I had known.  Nowhere in my reading did anyone mention that there is a little frybread hut in the campground, which meant I would have carried less food.  But I walked around and found a great site for my hammock and strung up.  Shortly thereafter a storm came in, I was happy to be in camp given I’d forgotten my rain gear.  So I resolved to take a little nap in the hammock and wait through the storm, just one thing.  I had tied off to a slightly thin tree and it swayed a bit in the wind.  Of course when you’re in a hammock if your tie off tree moves your hammock moves up or down.  Unfortunately, the wind was blowing the tree toward my hammock, so during gusts my hammock would crash to the ground.  So, in the middle of forty mile an hour winds I had to re-tie my hammock to another tree, no picnic whatsoever.  But I got it tied off after a time and had to do some additional rigging, but after a time I got things set up well.  The storm wrapped up and I was able to get some good shots of the falls.

Over the next two days I led a pretty idyllic existence, hike a little, take some photos, meet some people, eat, take a nap, repeat.  My neighbor in camp was a pretty fascinating guy, part of the year he works at Havasu running groups for BG Wild.  He spends the rest of the year in the bush in Namibia as a missionary.  Their camp set up also had these amazing inflatable couches that were just too comfortable to pass up. 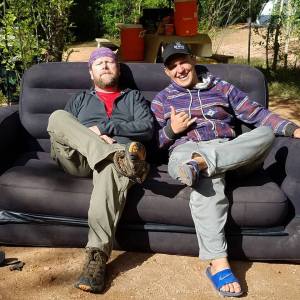 I’d meet lots of really cool people, as you almost always do backpacking.  I met a couple of young women doing their first hike ever, some PCT hiker trash and a group of women from Marin County.  One of them was absolutely beautiful and stole my heart for the weekend.  She reminded me of a younger, prettier version of the actress Molly Parker and was a total sweetheart. 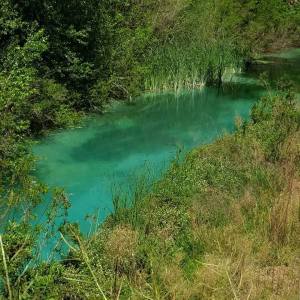 The beauty of a trip like this is a really amazing thing.  You’re doing some strenuous hiking, you’re camping and staying for a couple of days in an absolute paradise.  I slept better over those two nights than I have in months.  Something amazing about being out in nature in a hammock.  This is the real life, being out there on the trail, camping and exploring.  There are few other places I feel as happy, restful and peaceful as I do on the trial.  I hope you find something similar in your life that does this for you my friends.  Have a happy day. ~ Rev Kane

Michael Kane is a writer, photographer, educator, speaker, adventurer and a general sampler of life. His books on hiking and poetry are available in soft cover and Kindle on Amazon.
View all posts by Michael Kane →
This entry was posted in personal happiness and tagged adventure, backpacking, camping, grand canyon, happiness, havasu falls, hiking, paradise, travel. Bookmark the permalink.