When you arise in the morning, think of what a precious privilege it is to be alive – to breathe, to think, to enjoy, to love. ~ Marcus Aurelius

Today’s post is a special one to me as it is me reflecting on some of my most precious moments while doing my Appalachian Trail hike this summer.  The overall experience was amazing, it is hard for me to recall a time in my life when I was more challenged, relaxed and happy all at the same time.  Nor a time, except my first year at Burning Man, where I found a more amazing group of like-minded and amazing people.

Given my thousand miles on the trail this quote really hits home for me and leads to my first really special moment.  Several years ago at a sustainability workshop in Vermont I met some really great folks.  Several of them have become friends and one Jim Cooper lives in Georgia.  Jim offered to hike me into the AT in Amicalola State Falls Park.  We met up at the Hike Inn and spent the night there and the next day Jim walked me to the junction point between the Approach Trail and his trail back out of the park. There in the rain we said goodbye and he took this picture. 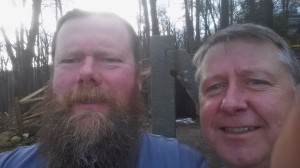 The bond that links your true family is not one of blood, but of respect and joy in each other’s life. ~ Richard Bach

I’ve written about the importance on the AT of the trail community.  But a really important subset of the overall community is your trail family.  The quote above applies every bit as much to my trail family as any blood family.  I had a lot of hiking partners on the trail but some of the folks I spent the most time with are really my trail family.  My family was first born on the climb outside of the Nantahala Outdoor Center.  That day, four old bastards engaged in what felt like a straight up, never-ending hike.  It was a warm day and water wasn’t as plentiful as we had hoped.  We were worn out on the climb but we were also smiling at laughing.  There was a sudden search for some really fragrant flowers that turned out to be Backtrack’s bug spray, and Awesome who was damn near out of water suddenly disappeared up the trail at one mention of water ahead.

We reached the top of the climb and we were whooped but happy, although a couple of us would move on further down the trail a little further, that day would cement the first incarnation of what came to be known as the AARP Gang, the name coming from the fact that the youngest member of our group was 49.  From left to right below, Awesome, Backtrack, Rev Kane and Kingfisher, photographer credit to Damn Yankee. 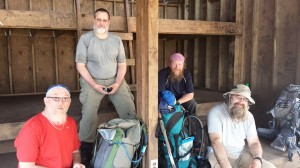 The original AARP group after their climb out of the NOC

The AARP Gang would expand over time and would include the four original members, the kids, Shaggy & Second Star, and the one full completer in the group Jedi who summitted Katahdin a couple of weeks ago.  At times we also had some other wonderful hikers with us,  Mad Hatter, Damn Yankee, Appendicitis (tough cookie) and Optimist, Ice Cream and others…..my apologies to anyone I’ve failed to mention. 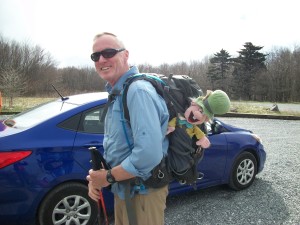 Mad Hatter heading back to the trail

I’m a big believer in overcoming and achieving and doing things and not feeling sorry for yourself. ~ Drew Carey

One of the most amazing people I’ve ever met was a hiker named Backtrack.  He got his name going the wrong way on day two on the trail, which is really funny once you find out he flies airplanes for a living.  He is at some level a living urban legend, he in fact, three weeks before hitting the trail walked into REI, laid down a credit card and said give me everything I need to hike the Appalachian Trail, and he did this in Washington State.

He’s a big guy and I will say when I first met him on the trail an absolutely pathetic hiker.  When climbing hills he was puffing so loud it sounded like a black bear very slowly chasing you up a hill.  He was equally slow going down hills and sweated like no other human being I’ve ever met, save maybe our friend Kingfisher.  Several days into our hike, I’d met him on my third day, we wrapped up an eleven mile day and he said, “that’s a first.”  Not sure what he meant I asked, he’d just hiked his first ever double-digit mile day.  It was a happy moment and I was glad to be there with him.

Backtrack’s story is one of the most bittersweet tales from the trail this year.  Over the next few weeks he would learn from everyone, he’s incredibly intelligent and he soaked up information and shared experiences like a sponge.  Frankly, within a couple of weeks he went from someone who could barely keep up with me to someone I could not keep up with on the trail.  Unfortunately he also has terrible knees that degraded very quickly and by Erwin, Tennessee would take him permanently off the trail. 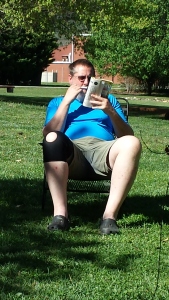 The other thing that bears mentioning about Backtrack is that he is one of the most social and nicest human beings I’ve ever met.  His first order of business arriving in camp at the end of the day was to say hello to everyone and chat, often forcing him to set up and/or eat in the dark each night.  Once he knew he couldn’t return to the trail he went back to Washington state, bought an RV and came back to the trail to be a full-time trail angel.  Many of us, stretching from Damascus to Katahdin, owe him huge debts of gratitude for rides, slack packs, awesome zero days, places to sleep and shower, and just an amazing amount of kindness and friendship.  He will certainly be a life-long friend.

Have a happy day my friends, more tomorrow ~ Rev Kane

Michael Kane is a writer, photographer, educator, speaker, adventurer and a general sampler of life. His books on hiking and poetry are available in soft cover and Kindle on Amazon.
View all posts by Michael Kane →
This entry was posted in Appalachian Trail (AT) Happiness and tagged adventure, appalachian trail, backpacking, family, friends, happiness, hiking, selected family. Bookmark the permalink.