The Best Day of his Life

The Best Day of his Life 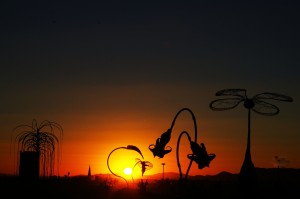 So it’s been a pretty crappy day, my job has some political aspects to it and sometimes I end up in some incredibly difficult conversations and live those minutes between Scylla and Charybdis with a good bit of trepidation and anxiety.  So I decided after having such a bad day to take a trip across the web searching, “the best day of my life.”  Perhaps it was a bit of cynical and snarky search but it led to something really interesting.  We over use the term nice, but this post is really nice and should bring a smile to your face, it did for me.  The post comes from beliefnet.com and the link to the story is: http://www.beliefnet.com/Inspiration/2010/03/The-Happiest-Day-of-My-Life.aspx?p=1

I’ve cut and pasted in the full text below and hopefully it will help you all have a happy day and gives us all a simple and elegant way to do that. ~ Rev Kane

The Best Day of My Life

Many years ago, I worked in an office with large windows that looked out over a busy overpass. I stood by one of those windows one day, when a woman in a passing car looked up and made eye contact with me-naturally, I waved.

A chuckle escaped my lips as she turned and tried to identify me. It was the beginning of a year of window antics. When things were slow, I stood in the window and waved at the passengers who looked up. Their strange looks made me laugh, and the stress of work was washed away.

My co-workers took an interest. They stood back out of view and watched the reactions I received with amusement.

Late afternoon was the best time. Rush-hour traffic filled the overpass with cars and transit buses, and provided a wealth of waving opportunities for my end-of-day routine. It didn’t take long to attract a following-a group of commuters who passed by the window every day and looked up at the strange waving man. There was a man with a construction truck who would turn on his flashing yellow lights and return my wave. There was the carpool crowd and the business lady with her children fresh from day care.

My favorite was the transit bus from the docks that passed my window at 4:40 PM. It carried the same group every day. They were my biggest fans.

Waving grew boring, so I devised ways to enhance my act. I made signs: “Hi!”,”Hello!”, “Be Happy!” I posted them in the window and waved. I stood on the window ledge in various poses; created hats from paper and file-folders, made faces, played peek-a-boo by bouncing up from below the window ledge, stuck out my tongue, tossed paper planes in the air, and once went into the walkway over the street and danced while co-workers pointed to let my fans know I was there.

Christmas approached, and job cuts were announced. Several co-workers would lose their jobs. Everyone was depressed. Stress reached a high point. We needed a miracle to break the tension.

While working a night shift, a red lab jacket attracted my attention. I picked it up and turned it in my hands. In a back corner, where packing material was kept, I used my imagination and cut thin, white sheets of cloth-like foam into strips and taped them around the cuffs and collar, down the front, and around the hem of the lab jacket. A box of foam packing and strips of tape became Santa’s beard. I folded a red file folder into a hat and taped the beard to it. The whole thing slipped over my head in one piece.

The next day I hid from my co-workers and slipped into the costume. I walked bravely to my desk, sat down, held my belly, and mocked Santa’s chuckle. They gathered around me and laughed for the first time in weeks.

A few minutes later, my supervisor walked through the door. He took three steps, and then looked up and saw me. Pausing, he shook his head, turned, and left.

I feared trouble. The phone on the desk rang. It was my boss, and he grumbled, “Mike, come to my office!” I shuffled down the hall. The foam beard swished across my chest with each step.

“Come in!” The muffled voice replied to my knock. I entered and sat down. The foam on my beard creaked. He looked away from me. A bead of sweat rolled down my forehead. The only sound in the room was the hammering of my heart. “Mike…” That was all he managed to say. He lost his composure, leaned back in his chair, and bellowed with laughter as he held his stomach. Tears formed in his eyes, while I sat silent and confused. When he regained control, he said, “Thanks, Mike! With the job cuts, it’s been hard to enjoy the Christmas season. Thanks for the laugh, I needed it.”

That evening, and every evening of that Christmas season, I stood proudly in the window and waved to my fans. The bus crowd waved wildly, and the little children smiled at the strange Santa. My heart filled with joy.

For a few minutes each day, we could forget the job losses.

I didn’t know it then, but a bond was forming between my fans and I. The next spring, I discovered just how close we had become.

My wife and I were expecting our first child. I wanted the world to know. Less than a month before the birth, I posted a sign in the window, “25 DAYS UNTIL ‘B’ DAY.” My fans passed and shrugged their shoulders. The next day the sign read, “24 DAYS UNTIL ‘B’ DAY.” Each day the number dropped, and the passing people grew more confused.

One day a sign appeared in the bus, “What is ‘B’ DAY?” I just waved and smiled.

Ten days before the expected date, the sign in the window read, “10 DAYS UNTIL BA– DAY.” Still the people wondered. The next day it read, “9 DAYS UNTIL BAB- DAY,” then “8 DAYS UNTIL BABY DAY.” My fans finally knew what was happening.

By then, my following had grown to include twenty or thirty different busses and cars. Every night, they watched to see if my wife had given birth. The number decreased and excitement grew. My fans were disappointed when the count reached “zero” without an announcement. The next day the sign read, “BABY DAY 1 DAY LATE”. I pretended to pull out my hair.

Each day the number changed and the interest from passing traffic grew. My wife was fourteen days overdue before she finally went into labor. Our daughter was born the next morning. I left the hospital at 5:30 AM, screamed my joy into the morning air, and drove home to sleep. I got up at noon, bought cigars, and appeared at my window in time for my fans. My co-workers were ready with a banner posted in the window:

I didn’t stand alone that evening. My co-workers joined me in celebration. We stood and waved our cigars in the air, as every vehicle that passed acknowledged the birth of my daughter. Finally, the bus from the docks made its turn onto the overpass and began to climb the hill. When it drew close, I climbed onto the window ledge and clasped my hands over my head in a victory pose. The bus was directly in front of me when it stopped in heavy traffic, and every person on board stood with their hands in the air.

I was choked with emotion as I watched them celebrate my new daughter.

Then it happened-a sign popped up. It filled the windows and stretched half the length of the bus. “CONGRATULATIONS!” it read.

Tears formed in the corners of my eyes as the bus slowly resumed its journey. I stood in silence as it pulled away from view. More fans passed. They tooted their horns and flashed their lights to congratulate me. I hardly noticed them, as I pondered what had just happened.

My daughter had been born fourteen days late. Those people must have carried that sign for weeks. Each day they must have unrolled it and then rolled it back up. The thought of them going through so much just to celebrate my new baby made me cry.

I made a fool of myself in that window for eight months. I made those people smile after a long day at work. They must have enjoyed it, because on the happiest day of my life they showed their appreciation.

That day, more than twenty years ago, changed me. I just wanted to make my day better. I didn’t realize how it affected others.

Ever since then, I try to put a smile on someone’s face every day. I compliment strangers on their clothing. I start conversations in elevators. I even make jokes in crowded New York City subways. Some may think I am stupid, but I know there is a chance that I’m making someone’s day-someone who may one day hold up a sign that says “Congratulations!”.

Michael Kane is a writer, photographer, educator, speaker, adventurer and a general sampler of life. His books on hiking and poetry are available in soft cover and Kindle on Amazon.
View all posts by Michael Kane →
This entry was posted in personal happiness and tagged blog, children, happiness, happy, life, positivity, smile, story, wisdom. Bookmark the permalink.