Welcome to my new tinier life

Welcome to my new tinier life

There is only one day left, always starting over; it starts at dawn and is taken away from us at dusk. ~ Jean-Paul Satre

Vacation is over, I’m writing this post on my last day before I start my new job.  I will have been off of work for three weeks less than a full year.  It’s been a good year and let’s start off tonight with a little recap.  I left my job in the Mojave Desert and headed east stopping to see some friends along the way including a good friend from grad school I hadn’t seen in person in twenty years.  I used upstate NY, where most of my family is, as my base of operations and landing spot between trips.  So I got to spend a lot of time with my family, especially my nieces and nephews, I have eight, soon to be nine.  I have a little niece due to arrive in the next few weeks and I’m very excited.  I also caught up with a lot of old friends.

I headed first to Scotland where I hiked the Western Highland and Great Glen Ways.  I love Scotland, it’s a beautiful country and the Scottish people have always been incredibly friendly and welcoming to me.  Helped in no small measure by the fact that genetically we’re related and I certainly look Scottish, especially when I’m sporting the big beard.  In addition to hiking I spent some time in Glasgow and Edinburgh.  Edinburgh is one of my favorite large cities and I was there during festival so the town was full of life and art.

I left Scotland to head to Spain to hike the Camino Primitivo, one of my less satisfying hiking experiences.  The combination of too much road walking, too many dogs and too much heat led to my decision to abandon the hike only a few days in.  Even in that short amount of time I met some really great people and visited some beautiful places.  Long distance hiking is special that way.  Leaving the trail I headed back to Oviedo, a city I really came to like.  It’s a mellow city with some amazing architecture and history and in true Spanish fashion is a city that comes alive at night.  Single people, families all are out in the squares and restaurants socializing til late at night.  It was a new culture for me but one that really suits my natural night owl tendencies.  From Oviedo I headed north  to Gijon and the beach, a place with amazing giant tidal swings and a coastal hiking trail that connects to one of the Caminos.

I left Spain to visit three cities in Portugal, Aveiro, Porto and Lisbon.  Each city had it’s charms and I enjoyed my time there.  If you’re going to Portugal prepare for hills, Porto and Lisbon especially are beautiful hilly cities.  Like most cities they are complex, high priced tourism mixed with ancient history and poverty.  I enjoyed exploring all of them.

I then left Europe for my first trip  to Africa.  I spent a week in Morocco, not nearly long enough but three days living in the souk in Marrakech wore me out.  It was the living embodiment of the Crosby, Stills and Nash song although I took the train from, not to Marrakech.  The city was amazing and the sights and smells utterly amazing.  The best people watching I’ve ever encountered.  I would sit at the cafes on the square and watch the con men make their money.  This did not make me immune, I paid far too much for the photo below and learned a valuable lesson.  Never negotiate with a man holding a cobra.

My favorite scam was performed by two gentlemen I named the Monkey Guys.  Two large and imposing looking Moroccans who had well-trained monkeys.  They would slip up behind a couple and toss the monkey on the guys back.  The monkey was trained to scramble up on top of the man’s head and sit there.  Then the Monkey Guys would pop up, apologize and say, “but what a great picture.”  They would get the woman to take a picture then put their hand out for the tip.  So the couple faces having a monkey on the guys head, that isn’t moving, and a large, scary looking Moroccan dude demanding money.  Everyone I saw in this situation paid.

I spent a few days in Tangier but I was worn out and had booked a beautiful hotel with a rooftop pool and bar and although I walked the city a bit, spent most of my time enjoying laying by the pool, being waited on and having a spectacular view of the city and ocean.

The Ferry to Barcelona

I did one of the most interesting things I will likely ever do next.  Instead of taking the 45 minute ferry from Morocco to Tarifa, Spain I decided to go on a little adventure.  So instead I booked a 32 hour ferry ride to Barcelona.  The ferry was like a mini-cruise ship and I’m sure felt that way were you booked into a lovely little cabin with a bed and your own bathroom.  That was not the way I traveled.  No, I had a Pullman Seat in a giant cabin with over 100 other people.  There were four such cabins, which included 400 Moroccans, 2 Swiss hippies with dread locks and me.  The crew was almost entirely Filipino and Italian, but we only ever saw them at meals.  Oh, and only three sets of bathrooms.  Some of the folks on the cruise were professionals, they had sleeping set ups, some had brought air mattresses and slept in the nooks and crannies in the hallways, it was amazing.  The bathrooms, generally degraded the entire trip.  Sleeping was like trying to sleep on a plane or a bus but in non-reclining seats.  Happily, you could go out on deck and it was a beautiful voyage, at least aesthetically.  The intercom system was very much like the intercom on the NY Subway, imagine the teacher talking on a Peanuts special.  There was little organization when we disembarked and the only languages being spoken were French, Arabic and Italian.  The first two I don’t know and the third is a language I can read but hardly speak.

While disembarking I actually walked all the way to land level only be turned around because it was for car drivers only, walked against the crowd all the way back up three levels to be turned around and sent out the way I had started.  All of this to be bused, delayed and dropped off at the closed port terminal at midnight with no phone service, and no taxis or buses serving the port at that time of night.  My GPS said 4 miles to downtown Barcelona and my hotel, so I walked.  Happily it was a mostly deserted port area at that time.  Barcelona was a great city, but there are too many people there.  On any of the popular streets it’s like walking at rush hour in Manhattan, but the art, the architecture and the restaurants were amazing.

From Barcelona I took the train to Madrid, I only spent a couple of days transiting through Madrid but didn’t enjoy the city.  It likely had a lot to do with where I was staying, my brief pass through and the heat but other than its usefulness as a transportation hub, I wasn’t really excited by Madrid. 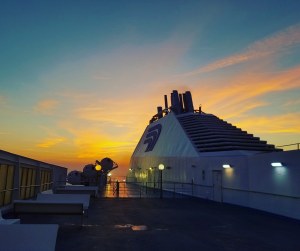 I bounced back through Scotland and to the US for a few weeks before starting my final adventure.  I moved to Oaxaca City, Mexico for two months.  The links back to the pieces I wrote about that experience will give you a lot more info and photos.  Oaxaca served to check off a major bucket list item for me.  I collect Day of the Dead (DOTD) art and years ago I bought a piece from and artist in Oaxaca.  He talked lovingly about the city, the art scene and the amazing DOTD festivals in the city.  So I knew someday I would have to go and I did.  Oaxaca is wonderful and what I really should write is it’s awful, boring and unsafe so don’t go.  I should write that because Oaxaca is at the edge of becoming a cool travel destination and more and more tourists are visiting the city.  There’s a reason for this, Oaxaca is a UNESCO World Heritage site for food, it’s a safe city, it’s in the poorest part of Mexico so everything is unbelievably cheap.  The people are amazing, accommodating and friendly, the food is as good as anything you’ll find in SF, NY or LA.  There is art everywhere, awesome natural sites to go see, the best Mezcal I’ve ever tasted and the weather is like the weather in San Diego.

I attended language school there, there are a ton of language schools in the city.  It was a great experience and I made some good friends, of course one of them Joan, was Scottish.  I really loved my time in Oaxaca and it’s some place I will continue to visit and likely someplace I’ll spend a couple of months every year in retirement. 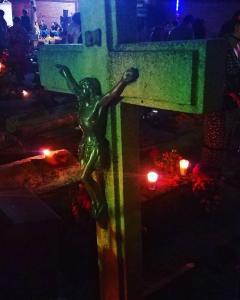 Back in the USA

I returned stateside, spent some time in New York, a month on the Gulf of Mexico and then drifted west.  Back in California I spent time interviewing for jobs and then moving my possessions from Southern California to the Bay Area, I’m living just outside San Francisco.

I have tagged my new life as my new tiny life.  Everything, mostly because of cost, is tinier here.  I am living in a 600 square foot apartment.  My parking space is between two poles that leave me with about 3 inches of clearance on each side of my mirrors.  I’ve continued to work on downsizing my life and have worked my excess possessions outside the apartment down to a 5 by 5 storage space.  So my life has shifted from a 1400 square foot, split level apartment and a 10 by 10 storage space to 600 square feet and a 5 by 5.  I only have 6 years to retirement, I’ve stayed under 200 pounds for over a year for the first time in 20 years, everything thing in my life seems to be shrinking.  This however is not a complaint, just an observation.

I’m excited for my new life, my new apartment and my new job.  I already in 3 weeks here have more of a social life than I had in two years in the desert.  I have friends in the bay area to re-connect with, I live between the ocean and the bay and we had a really hot day the other day, it was in the 80’s.  Compared to the triple digit life in the desert this is a joy.  I’ll wrap this up here, I have a date to go into San Francisco for dinner and to a book reading, like I said, happy for my new life.  As always, have a happy day my friends.             ~ Rev Kane

Michael Kane is a writer, photographer, educator, speaker, adventurer and a general sampler of life. His books on hiking and poetry are available in soft cover and Kindle on Amazon.
View all posts by Michael Kane →
This entry was posted in personal happiness and tagged adventure, california, happiness, mexico, morocco, oaxaca, san francisco, scotland, spain, travel. Bookmark the permalink.

2 Responses to Welcome to my new tinier life