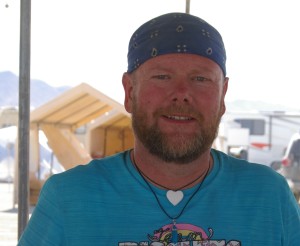 A beautiful woman delights the eye; A wise woman, the understanding; a pure one the soul ~ Minna Antrim

At Burning Man I camp in camp, Oh No You Didn’t!  Burning Man is a gift economy, so when you come to a camp with a bar they give you a drink with no expectation of anything in return.  If you want to give your bartender a gift you can, if not, no worries.  Most camps however have some sort of shtick.  At our camp it’s that our bar is a confessional lounge.  So we ask that you confess something with your first drink, something embarrassing or naughty or perhaps a really good story.  We get a LOT of really good stories, some funny, some gross, some absolutely shocking.  But the great thing about this concept is what it does for the level of conversation.  Since people fairly immediately are revealing something personal, the normal initial barriers are down.  At Burning Man, most people have already dumped a lot of the barriers they normally carry, the bar knocks them down even more.  So what you get at Burning Man are very real conversations where people are willing to reveal who they really are, the masks they normally wear missing.

I am a conversation junkie, I like nothing more than to have really deep and personal conversations, to challenge and be challenge what be people think and feel.  At Burning Man, this happens so much more than anyplace else.  Our camp set up really facilitates these type of conversations so I get to have a lot of them.  While in the desert this year two conversations really stuck out for me as being especially amazing, each with a really amazing woman.

One night a really stunning woman walked into the bar.  She was tall and had lively and beautiful eyes and a great smile.   Early in our conversation she revealed it was her first burn and I asked if she had a playa name yet.  She said people had been calling her Wonder Woman because she resembled Gal Gadot and she really did.  I explained the bar and she said she had no sins to confess.  A lot of people say this but her eyes told me that she was obviously someone who had some interesting stories.  She revised her statement to say she had no guilt, I immediately knew she was going to be different.  She asked for a whiskey and proceeded to tell her story.  I won’t reveal it here, not because it was particularly bad or would make her look bad, but mostly because the people she spoke about still don’t know the real story.

What the story did immediately reveal though was that this woman did not think like almost any of us.  And to be clear, I mean that as damn near the highest comment I can pay someone.  I find intelligence and a unique mind irresistibly attractive and I settled in hoping our conversation would go on for some time.  I was not disappointed and it was the most fun conversation I have had in a very long time.  Her mind does not work in straight lines, most people pretty linearly go from point A to point B, she does not.  Don’t misunderstand what I’m saying, she’s highly intelligent and my best guess would be that linearity is completely boring for her.  She gets from A to point B via, point T and D and maybe a quick turn through the number 7.  The way her thoughts developed absolutely fascinated and captivated me.  We talked for over four hours with almost no pause in the conversation, without a doubt my best night at Burning Man this year. 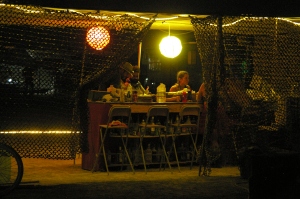 The bar at Camp: Oh No You Didn’t!

While bar tending one night my friend Pi says, “Rev” and directs me over to someone at the bar.  Still not sure why, but was happy to pop over and take someone’s drink order and confession.  The woman who was pretty quickly in front of me was gloriously bald.  I pulled back my bandana to reveal my equally shaved head and said, “like your hairdo.”  She smiled and we went through the process of explaining how the bar worked.  She wasn’t drinking and we started talking.  My suspicions around her hairstyle was confirmed a little later in the conversation when she explained that she had just finished round 10 of 12 of her chemotherapy treatment.  And also that she was reacting to treatment really well and things were working positively.

She had beautiful eyes and made incredible eye contact, she smart and balanced and as real as a person could be.  She works as a flight attendant and is also an artist in an art collective.  I was absolutely captivated by her, the conversation flowed effortlessly and talking to her just made me feel good.  Sometimes, when people are facing a serious illness they gain a really amazing perspective on life.  She had this, although from talking with her about her life, I get the feeling she’s always had a really amazing perspective on life.  Talking to her just made me feel good, a combination of the connection, the focus and perspective she possessed.  She was a magnificent and beautiful human, our conversation was brief but really had an impact on me and I’m glad to have met her.

I met a lot of really great people at Burning Man this year and had a lot of fabulous conversations.  I love my campmates, the conversations  we have are absolutely fantastic and can bounce from politics to sex to economics to social issues to absolute snark.  People on the playa are their better selves and it was great to have another week in the dust.  Have a happy day my friends ~ Rev Kane 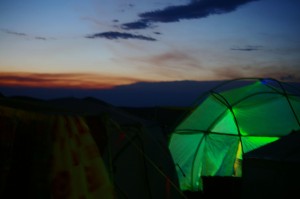 My After Burn Report

On Burning Man  and the Appalachian Trail

Michael Kane is a writer, photographer, educator, speaker, adventurer and a general sampler of life. His books on hiking and poetry are available in soft cover and Kindle on Amazon.
View all posts by Michael Kane →
This entry was posted in burning man, personal happiness and tagged adventure, be happy, burning man, canada, cancer, conversation, happiness, life, wonder woman. Bookmark the permalink.