The Importance of Caring about Other People

The Importance of Caring about Other People 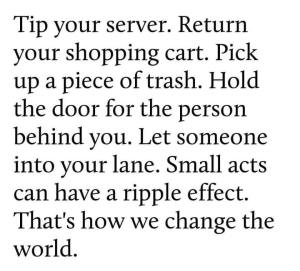 I have always believed that helping your fellow man is profitable in every sense, personally and bottom line. ~ Mario Puzo

The Loss of Common Courtesy and Kindness

So tonight I want to talk about something that has bothered me for some time.  Over my lifetime two things, that I believe are connected,  have seemed to decrease.  First, people seem to be less willing to offer the simple kindnesses of life.  What do I mean?  Well, a lot of them are contained in the image above, but the biggest one is missing, smiling.  I have become somewhat of an oddity these days in that I make eye contact.  That’s right, I’m one of those freaks who walks around not looking down at my phone or at the ground, not avoiding, but actually making eye contact with the people I encounter and THEN actually smiling at them.

When I was younger, a lot younger, this used to be far more common.  People actually made eye contact, returned smiles, heck, some even asked you how your day was going.    And not in a cursory sort of way, but actually wanted an answer.  This however has become actually weird, and I realized this in all places, Cedar City, Utah.  Around ten years ago I spent some time living in Utah, near Panguitch but very much out of the way.  The nearest large city was a town called Cedar City.  So needing supplies for the several months I’d be there, I headed over to Walmart in Cedar City.  I parked my car and began walking toward the store.  I was passing a family and said hello, and they said hello, how are you?  Then they stopped and were actually waiting for an answer.  It utterly and completely threw me off.  I ended up having a couple of minute conversation with them and then moved on.  Passed another person and the same thing happened, again and again.  It was the norm in this area that people wanted actual connection, even with strangers.  The fact it felt so weird and rare brought me to the sad realization that we’ve lost something in our society.  Something good that I actually really came to appreciate living there.

The second thing that seems to have decreased is the ability for people to realize there are any other people on earth, or maybe just that they matter.  We see this mostly wherever lines form.  People will cut into lines without ever noticing they exist.  This happens almost every single time I get into a self-checkout line at a store.  If there is the tiniest gap between the line and the registers, someone just walks passed the line and attempts to go right to the registers.  When someone says something, they always claim to never have seen the line.  And they either didn’t, or decided to ignore it.  Think about this, a fellow human either was so self-absorbed they didn’t see several other humans waiting in line, or decided they were entitled to be in front of them.

This problem has gotten bad, we see it all of the time.  People seem to have come to expect that they alone are the priority in the world, that they are entitled to be served first, get in front of you in traffic, to drive where and when they want without considering the pesky reality that other people are driving there.  It extends to people often not being remotely concerned with how their actions impact others, because their actions are all that matters.  Let me tell you a story from yesterday.

I was in a store lot getting ready to leave and there was a car in front of me who saw someone heading for their car up ahead.  This is a parking lot with one-way traffic lanes.  Now this family heading into their car had a cart full of groceries and three kids, so it would be a couple of minutes before they’d be ready to pull out.  I was fine with someone waiting for their spot, I just wanted to get through and around so I could go find my own spot.  So I started to pull around the waiting car which then maneuvered to block me from going past.  I leaned out my window and yelled, “I don’t want your parking spot.”  They then pulled ahead and let me by.  I was completely unsurprised by this because of what I saw when I entered the lot.

A lady was driving down one of the lanes heading toward the store, she saw a vehicle with it’s hatchback opened and decided she would take their spot, so she put on her directional and stopped.  She also carefully was positioned so no one could pass her and scoop “her” spot.   As I was walking by I noticed her with a car waiting behind her.  Then I looked at the car she was waiting on.  It was two parents a toddler and a baby.  Dad was attempting to wrestle the toddler into a car seat.  The mom was changing the baby’s diaper.  Their full cart of groceries was sitting next to the car.  So for those of you with kids you know how far from leaving this parking spot these parents were.  The woman waiting was undaunted, she just sat there and out of curiosity I sat on a cart stand to watch.  As she was sitting there, cars began lining up behind her.  Each person who entered that lane didn’t anticipate traffic not moving and so they stacked up.  And she sat there.  And the cars were back all the way back to the entry point of the lane.  And she sat there.  People started honking their horns, and she sat there.  So now, no one can move forward and during this time people leaving the store, loading their cars can’t pull out.  This woman has like a dozen car fulls of people completely immobilized.

The mom changing the diaper was apparently dealing with a mess given the way she was holding the offending diaper when done.  She held it like a small bag of nuclear waste as she searched for a garbage can in the lot.  And the lady in the car sat there.  They got the baby into the car and started unloading the groceries from the cart into the car.  And she sat there with horns blaring behind her.  Finally, and all total this took almost ten minutes, the car with the baby pulled out and the woman pulled into “her” spot.  People driving by were furious, several making hand gestures, others saying “hello.”  She emerged from her car thoroughly unaffected by the whole affair.

We see this sort of behavior far too often these days.  Yes, people are also increasingly impatient, but this is exacerbated by the self-absorbed behavior of others who seem to have no situational awareness and are oblivious or uncaring about how their behavior impacts others.

So how should we react to this reality in order to retain our own happiness? Let’s Pay Kindness Forward!

We really have two ways we can react to a world that operates like this.  We can get angry, or we can be assertive.  Getting angry obviously kicks up our own stress levels and can turn an annoying instance into a bad one, or even unfortunately a tragedy.  So anger as a solution is not the way to go, although it happens to all of us from time to time.  The second is to be assertive.  The way I handled the guy who cut me off from “his” parking spot, or by mentioning to the person that is cutting the line that there is one.  These solve the issue, reduce annoyance for you and others and don’t escalate things.

But I also want to think bigger.  While it’s important in our day to day lives to reduce our own stress levels and things that decrease our happiness, what we really need to do is to change our culture.  We can all contribute to this in small ways everyday with small kindnesses in the hopes that others will replicate or pay forward these kindnesses.  So let’s give it a run, let’s hold that door, show that smile, let that person into traffic and heck maybe even say how are you, and actually wait for an answer.  None of this needs to happen at a level that will take more than a minute or so out of your day.  And just think, if everyone did a couple of things for a couple of people each day.  And if those who received it passed on this kindness to someone else, it really wouldn’t take that long for us to have a kinder, gentler and most important happier world in which we could all have happier days my friends.  Give it a try.  ~ Rev Kane

Michael Kane is a writer, photographer, educator, speaker, adventurer and a general sampler of life. His books on hiking and poetry are available in soft cover and Kindle on Amazon.
View all posts by Michael Kane →
This entry was posted in personal happiness and tagged be happy, beng friendly, consideration, happiness, kindness, pay it forward, politeness, road rage. Bookmark the permalink.