The way we experience the world around us is a direct reflection of the world within us. ~ Gabrielle Bernstein

In 1980, a really freaky movie came out, called Altered States.  It was a crazy mix of sensory deprivation tanks, psychedelics and science fiction.  The video below should give you a taste:

However the movie left me with an utter fascination with the idea of spending time in a sensory deprivation tank,  and landed it on my bucket list.  Luckily for me, “floating” as it’s called, has become a little bit trendy, and now that I live near San Francisco, fairly easy to access.  So Saturday morning I set out to have my first float experience.

Like I do with everything I do, I spent time researching what it would be like.  All of the reading I did said the set up for the experience is pretty much always the same.  You come in and you get a little orientation, either by video or like mine was, in person.  They explain to you how properly to use the ear plugs, how the pod works, including the lighting options that you have.  They explain that music will start you off, and music will be your warning that your time is almost up.  There’s a shower so that you can shower before and after, with specific before and after body wash.  They show you the little flotation pillows available and remind you which way to lay.  Because your last warning to get out is the filter starting and you really don’t want your hair sucked into the filter trapping you in the unit.  For those of us with no hair this is not an issue.  🙂

So I showered, and slipped into the pac man looking pod, I alternately thought it looked like the giant egg Robin Williams’s character arrived in on the show Mork and Mindy. 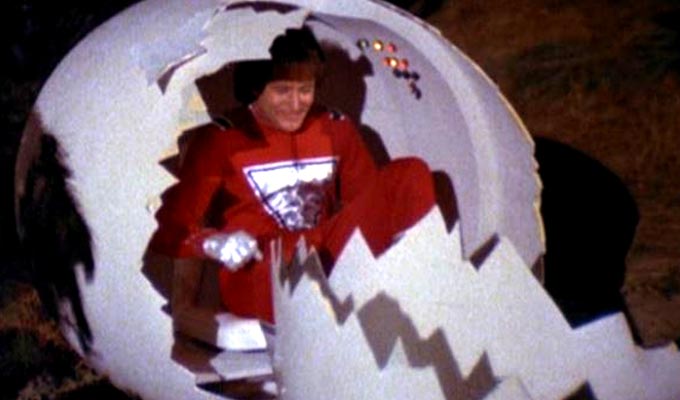 Getting into the float

Yes, you go into the pod naked after putting in ear plugs, showering and then putting Vaseline on any cuts you have.  You’ll miss something and you’ll know immediately because the salty water will burn the wound.  Happily the sensation fades pretty quickly.  I started by getting in, closing the lid and getting situated, you’re only in about a foot of water, but you can feel how buoyant you are immediately, but it is still possible to sit on the bottom and get your bearings.  I figured out the neck pillow and laid back.  Like when I wrote about being in the Dead Sea, it’s an amazing feeling being that buoyant and floating so easily.  Then I made the big step and turned out the lights.

It was interesting reading online about other people’s experiences as well as hearing from some friends.  Several people talked about falling asleep and honestly, going in tired really seems like it would lead to a lovely, albeit $70 nap.  Others talked about feeling claustrophobic and there is definitely a closeness.  For me though, it was the same closeness I feel in a sauna.  It’s warm at first in the pod, the water around body temperature means the air is also almost a hundred degrees and humid.  So the air definitely feels thick, humid and close.  Added to the lack of light and the reality of the pod, if you’re claustrophobic or anxious about being in the pod this could be really uncomfortable.  For me, it was close, but like in a sauna, I got comfortable in a few minutes.

Some people talked about getting really freaked out in the experience once the music stopped and they were floating, silent in the dark.  People talk about freaking out about drowning, or that they were in a coffin or even about death.  I think in many ways being in the pod parallels taking drugs.  The pod, like most drugs, are mood amplifiers, so take a drug or get into the pod when you’re really anxious about the experience and you’re likely to get even more freaked out once you’re involved.  I think the thing people really have to remember, is that you’re in control of your thoughts and the nice thing is, at any point you can reach over and turn the light on, you could sit up and lift the lid.  But I do see how someone starting to freak out could be pushed over the edge.  You see when I was first floating, I was spinning, ever so slightly and slowly.  I didn’t realize this was happening but was getting frustrated because my feet were touching the pod.  It was confusing and annoying that the pod was too short, it hadn’t seemed like that.  So I sat up and reached for the light, that was not where I thought it was.  Then for  about a minute I couldn’t find it, the lack of realization of the spin meant I didn’t actually know where I was.  It only took a minute to find the lid seam and following it to the hinge and the light button.  But if you were already freaking out, I imagine not finding that button could be terrifying.  Of course you could always just push the lid up.

Once I worked it all out and figured out how to steady myself from spinning and fully get the neck pillow where I wanted it, I got into the flow of the float.  Being in the pod is very much like meditating.  I think you get more benefit if you can calm your mind.  I’ve always been a terrible meditator because I really struggle with quieting my mind.  I have really good hearing and in the tank, even with the ear plugs there were noises I picked up on.  I could hear the pumps on the pods in the other rooms when they turned on, a couple of times someone was talking too loudly in the hall.  But the majority of the time it was quiet, absolutely dark and I was extremely comfortable floating.

The first things I noticed was that my body was over compensating for the lack of input.  My eyes were doing lots of those light flashes and floating colors that often happen when you close your eyes in the sun.  The big difference of course is that in the pod there is no difference between having your eyes open or closed, so you see the colors either way.  For a few seconds I had fun blinking and noticing no difference between eyes opened or closed.  Early on my feet felt pretty weird, I have some neuropathy from my fluctuating battle with Type II diabetes.  I’ve been eating better so the nerves are recovering as my sugar levels are dropping.  I think this was the reason, with absolutely no pressure on my feet the nerves were firing off and my feet had some minor pains and phantom pressures.

I get a little freaked out about getting water in my ears, so even though the neck pillow kept my ears above the waterline, I was conscious of the waves in the pod.  Eventually the small waves mellowed out and I was floating perfectly still.  It was a really comfortable experience.  Eventually I was so integrated into the water that I really was losing track of my body and by the end, I really felt like I was laying on the bottom, which of course I wasn’t, it’s just that my body was perfectly supported and my body interpreted that as laying on a surface, not to mention the blood in my body was likely settled to the lowest points of my body.

I had one auditory hallucination in the pod, I heard the name Scott clearly yelled.  I had no visual hallucinations and thought my thoughts drifted around and even daydreamed a bit, there was nothing extraordinary that happened.  The biggest surprise was that I really expected the time to go by incredibly slowly and that really wasn’t the case, the hour, felt like an hour, maybe a little less.

Was it worth it?

Some people have talked about the experience being the most relaxing thing they’ve ever done.  Some have talked about great meditation, and others about really having extraordinary clarity of thought.  I think for a lot of people, this is the only time they actually try and meditate in a truly serene and quiet environment which should help their meditation.  For others, I wonder how often they ever just lay down for an hour and do nothing but think.  I’m betting that’s really rare for most folks, but it’s something I make time to do from time to time. Typically on my back watching clouds or stars.  In many ways my time in the pod really felt like an hour in my hammock looking at stars.

I think if you’re curious about the experience it’s worth giving it a try.  You might get some deep meditation time, you might just get an hour alone with some downtime which is really missing in your life.  I came out relaxed but not exceptionally so.  One of the other things people have reported is heightened senses after leaving their session.  I didn’t get that although the slice of pizza I had afterwords was really good.  In the end, I think for me, a good hour long or 90 minute massage, particularly from KC, the best massage therapist in the world, is a much more relaxing and beneficial experience.

So what’s the happiness lesson from this post?  Well it’s a simple one, the same as my lesson from my Bucket List post.  Get out and check things off of your bucket list.  Even if the experience doesn’t measure up to the fantasy you created 30 years around taking hallucinogenic drugs and floating in a sensory deprivation tank until you can travel out of your body across time.  It’s still worth it to chase down your dreams, to get out of your comfort zone and to really feel like you’re taking advantage of everything life has to offer us.  Doing that, I promise my friends, will bring you many happy days. ~ Rev Kane

Michael Kane is a writer, photographer, educator, speaker, adventurer and a general sampler of life. His books on hiking and poetry are available in soft cover and Kindle on Amazon.
View all posts by Michael Kane →
This entry was posted in personal happiness and tagged altered states, be happy, float, floating, happiness, meditation, pod, relaxation, sensory deprivation, tank. Bookmark the permalink.